TSA “busted” the Brooklyn Nets guard when an Arizona Iced Tea can was flagged in the system. They found the weed in a secret compartment inside the can and they also found some in a grinder also inside the can. 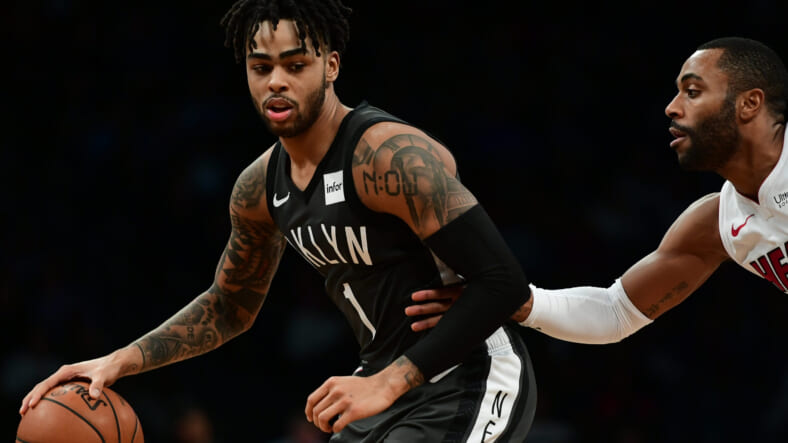 D'Angelo Russell left) #1 of the Brooklyn Nets controls the ball in the third quarter during the game against Miami Heat at Barclays Center on November 14, 2018 in the Brooklyn borough of New York City. (Photo by Sarah Stier/Getty Images)

NBA player, D’Angelo Russell was caught with marijuana in his checked bag at LaGuardia airport in New York City on Wednesday night while trying to catch a flight to Louisville, Ky., TMZ reports.

TSA “busted” the Brooklyn Nets guard when an Arizona Iced Tea can was flagged in the system. They found the weed in a secret compartment inside the can and they also found some in a grinder also inside the can.

“We got a call from TSA about D’Angelo’s bag for allegedly … marijuana. PAPD units responded, and they issued him a summons,” a Port Authority spokesperson told the New York Post.  “He was charged with possession of marijuana under 50 grams.”

The citation he received is a New York law violation. A person can be punished with a fine of $100 or less, according to USA Today.

Russell, 23, initially claimed that the weed was his brother’s, according to law enforcement. But, his statement didn’t work in his favor since he was alone and the can was in his bag. Fortunately, he was allowed to leave.

The Brooklyn Nets released a statement Thursday afternoon stating, “We have been made aware of the situation involving D’Angelo Russell and are in the process of gathering more information at this time.”

There have been no reports on how the incident will affect Russell.

According to a collective bargaining agreement, an NBA player would have to enter a marijuana program under the league if the athlete “has been convicted of (including a plea of guilty, no contest or nolo contendere to) the use or possession of marijuana in violation of the law.” The player cannot be suspended until he violates the marijuana policy three times, USA Today states.

TMZ reports that the basketball player had a “breakout season.” Each game, Russell averaged 21 points and 7 assists and made his 1st All-Star game.

The story is developing.