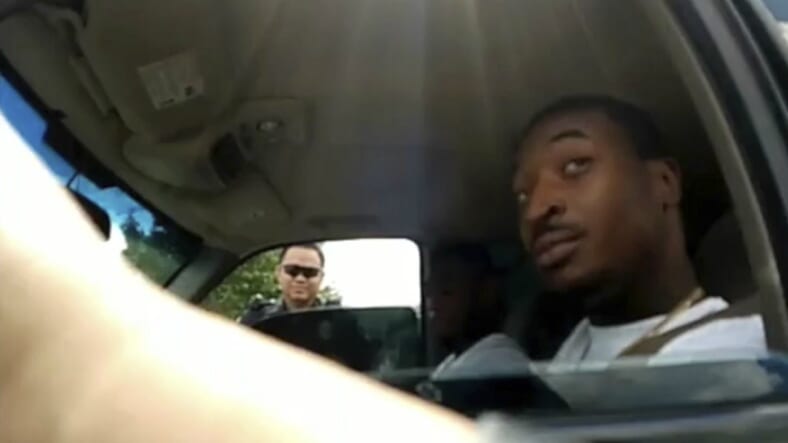 This file screenshot taken from Sept. 1, 2018, police body camera video provided by the Arlington, Texas, Police Department, shows an officer, foreground, talking to O’Shae Terry after stopping him for a vehicle registration violation, in Arlington, as a second officer, Bau Tran, background left, looks in from the passenger side window. (Arlington Police Department via AP, File)

A grand jury in Tarrant County, Tex., has indicted a police officer who shot and killed a man as he attempted to leave a September traffic stop.

Tran was a backup officer during the traffic stop and was supporting officer Julie Herlihy who stopped Terry, who lived in Forest Hill, Tex., due to expired tags on his SUV. Herlihy detected a scent of marijuana from the vehicle, which prompted a search.

While officer Herlihy returned to her vehicle to use her computer, Tran stayed near the SUV where his body cam picked up a conversation between Terry and himself. Terry turned off the vehicle and lowered the windows as instructed, which Tran responded, “We just have to do what we have to do.”

Terry would begin to roll up the windows and would turn on the ignition while stating “I ain’t going nowhere.” According to The Morning News, Tran held onto the window with his left hand and fired his gun into the SUV as it began to move. Terry was shot four times.

The SUV rolled further down the block and when it stopped, police said they found inside a Glock handgun with a 29-round extended magazine, more than a pound of marijuana and seven grams of ecstasy.

On Wednesday Tran was placed on leave while an investigation is conducted, which officials say will take several weeks to complete.

Terry’s family is represented by attorney Lee Merritt who said the indictment was necessary and argues Tran did not have a reason to fire his weapon.

“It’s not OK to shoot at someone to prevent them from leaving,” he said in November. “That represents a crime — more specifically, murder.”

In the representation of Tran, attorney Randall Moore said last year his client “did what he thought he had to do to protect the public.”

Tran has is an eight-year veteran of the Arlington police department. His first court appearance is scheduled for May 17.