Jaylon McKenzie was an eighth-grader who was already attracting college scouts, but his family must now deal with losing him in another senseless killing 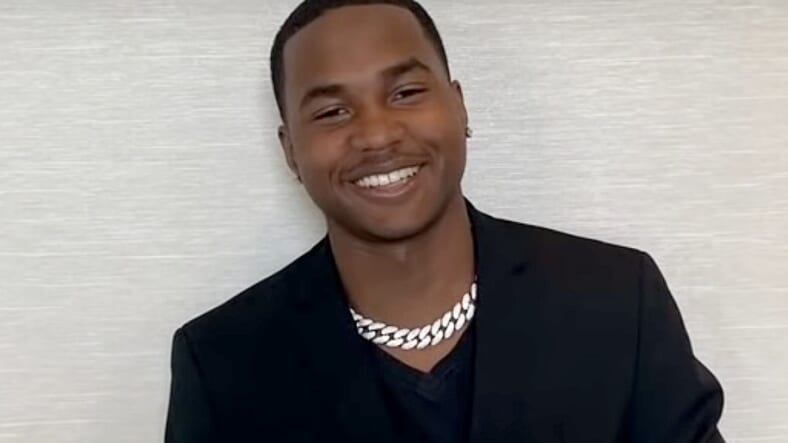 Jaylon McKenzie, 14, an eighth grader who was a rising star football was shot and killed at a friend's party in Southern Illinois (KDSK)

A promising eighth grader who was already highly sought after by college football recruiters was shot and killed Saturday night, CNN reports.

Jaylon McKenzie, 14, was a star football player from Belleville, Ill., whose future was so bright he was featured in the Future Issue of Sports Illustrated in November 2018 with comparable teen sports stars.

Jaylon had already fielded college offers from University of Missouri and University of Illinois. He had high sights on one day playing for the Los Angeles Rams or Chargers, his mother, Sukeena Gunner, told the network.

“They stopped by the party, not with any intentions to staying long,” said Gunner, explaining that Jaylon and his friends had gone by the even to pick up something from another friend.

But Jaylon’s brother called his mom around midnight to deliver the devastating news.

“I just started screaming,” she said. “I just prayed and asked the Lord not to take my baby.”

READ MORE: Police investigate killing of beloved teen gunned down in his DC home in front of stepfather

Illinois State Police said in a release they received a call about shots fired around 11:30 p.m. about a disturbance at a party in Venice, Ill. A number of law enforcement agencies arrived on the scene soon after.

According to Gunner, her son was an innocent bystander who was hit by a stray bullet when he walked outside to leave the party.

Jaylon and another teen, a 15-year-old female were rushed to a local hospital when he died. The girl remains in critical condition.

Gunner said the family is grappling with the enormous loss of a kid who was well-loved.

“It’s very hard,” she said. “It’s still like a bad dream, like I’m gonna wake up in the morning and my baby’s gonna be smiling at me asking for something to eat like he always does.”

“He just loved to watch them and perfect his craft,” Gunner said about his love for the sport and his love for celebs Tavon Austin and Odell Beckham Jr.

Jaylon attended East St. Louis School District 189. The district released a statement after it learned about the ordeal that several of its students were in attendance at the party.

READ MORE: Why teen was killed by best friend just days away from graduation

“School District 189 has learned that a few of our students were shot at a house party in Venice, IL at some point Saturday night,” a statement from the district read. “Few details are clear at this point. We do know that our youth, families and school staff have dealt with a number of tragedies and incidents of violence this year. We request space and time for them to appropriately grieve and come to terms with this latest impact of violence.”

His basketball and football coach, Al Lewis, said that not only was Jaylen an immense talent, but was a special young man.

“Outside of basketball, outside of football, he was just a great kid,” Lewis said. “I know that’s cliché in these type of situations, but you won’t find a kid or anyone saying anything negative about him. He was just great to be around, whether on the court or off the court.”