The 69-year-old woman who suffers chronic pain said the substance was recommended by her doctor, but because of a legal gray area, it is unclear to many if it can be carried freely 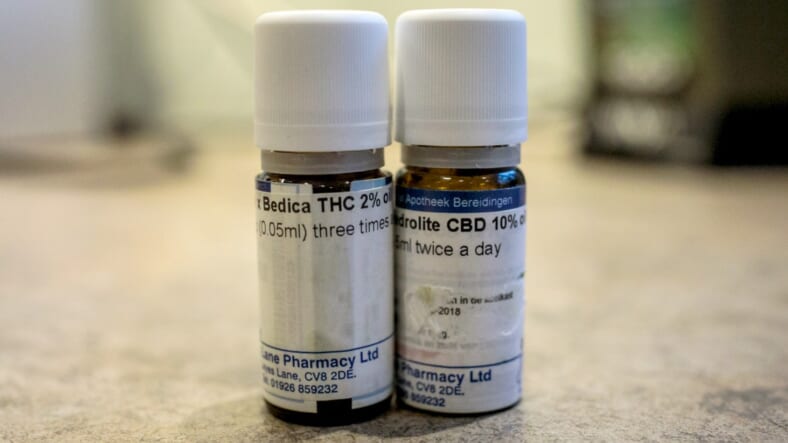 A North Carolina great-grandmother was arrested for possession of CBD oil. ( (Photo by Jack Taylor/Getty Images)

A North Carolina great-grandmother on vacation and hoping to enjoy Disney World had her holiday abruptly cancelled when she was taken into police custody for being in possession of the pain-relieving substance, CBD oil.

Hester Jordan Burkhalter, 69, was arrested at the checkpoint of the Orlando, Fla., theme park on April 15. According to USA Today, she had CBD oil in her purse but security officers stated they found “illegal narcotics believed to be THC oil.”

“I didn’t know what to think, I couldn’t understand it,” Burkhalter told Orlando’s WOFL. “I didn’t feel like I’d done nothing [sic] wrong. I never had but maybe one speeding ticket in my life, I’ve never been in a jailhouse.”

CBD, a shortened term for cannabidiol is a hemp substance derived from the cannabis plant, and is increasing in popularity for treatment from ailments ranging from aches to anxiety. It does not produce a high like its cannabis family cousin marijuana and can be found sold in shops across the nation.

Still, whether or not it is legal to possess is unclear to many and is the focal point of debate. In 2018, a federal ban on hemp production was lifted. Both marijuana and CBD oil contain tetrahydrocannabinol, or THC, which is what causes a high. But CBD is legal to possess if it contains 0.3 percent THC or less, according to The New York Times. Different strains of marijuana typically have much higher levels of THC.

But many states have not changed their laws to keep up with their federal counterparts, causing confusion over the legal possession of CBD oil.

During the encounter, Burkhalter refused to answer questions from the Orange County Sheriff’s office about if the item, which was labeled “Select CBD,” actually contained THC. The bottle’s label said that it did not, but officials were not convinced.

“(Burkhalter) was advised the contents of the glass bottle will be tested for THC,” an affidavit, penned by arresting officer Vincent Lebron reads. “I tested the substance … using a Marijuana presumptive drug test kit; the kit turned Red, indicating a presumptive positive result for the presence of THC.”

USA Today said Burkhalter was arrested at the scene for felony possession of hashish and was released on $2,000 bail. Since her arrest, all charges against Burkhalter have been dropped.

READ MORE: New marijuana legislation could finally help balance the scale of war on drugs effects on the Black community

She said the oil is used to help with chronic pain and explained to WOFL that her doctor recommended using it to assist with ailments throughout her body.

“I have really bad arthritis in my legs, in my arms and in my shoulder,” she told the local news outlet. “I use (CBD oil) for the pain because it helps.”

The U.S. Food and Drug Administration has not issued any regulation on CBD oil, meaning that it cannot be labeled as a medicine and thus cannot technically be prescribed, unlike medical marijuana. It also has not been tested in a controlled trial, so although many have praised its use, medical science has not yet produced a peer-reviewed study on its long term effects.

CBD products currently are not legal in Florida yet and the Sheriff’s office backs their deputy by stating he followed the law. In the state, a recently passed hemp bill is expected to support the use of CBD products, making illegal possession a thing of the past.