A quarter-century after the end of apartheid, the ruling African National Congress is facing opposition from rival parties, but they still hold a strong lead in vote counting so far 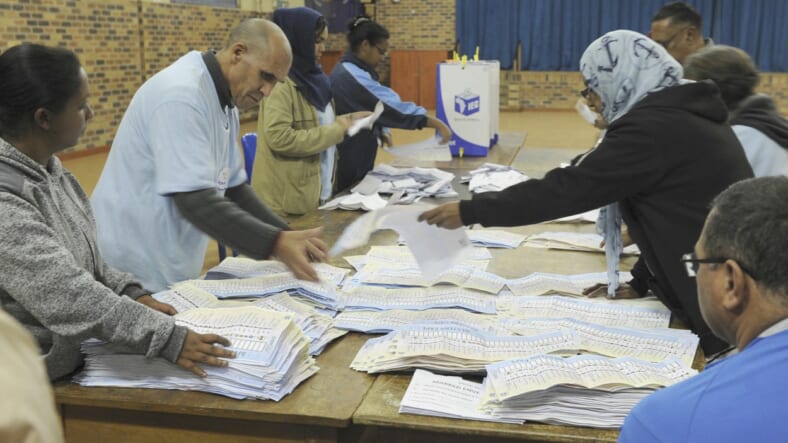 JOHANNESBURG (AP) — The ruling African National Congress held a comfortable lead Thursday with more than half the vote counted from South Africa’s presidential and parliamentary election, but it received much lower support than in the last ballot five years ago.

Opposition parties made widespread allegations of corruption against the ruling ANC party a major part of their campaigns ahead of Wednesday’s vote and voter apathy also appears to have affected turnout, which fell to 65% from 74% in 2014.

The ANC, led by President Cyril Ramaphosa, won 57% of the vote with 60% of the polling districts counted, according to results announced by the electoral commission. It received 62% of the entire vote five years ago.

The Democratic Alliance received 22% of the vote so far, the most of any opposition party, about the same share it received in 2014.

Mmusi Maimane, leader of the DA, campaigned vigorously on the corruption issue. Speaking at the electoral commission’s results center Thursday evening, he said that his party appeals to South Africans of all races.

The populist, leftist Economic Freedom Fighters, which also made graft a main campaign issue, increased its share of the vote to nearly 10% support.

More than 40 smaller parties also took part in the ballot.

In South Africa, the president and parliament are not elected directly. The number of votes won by each party determines how many representatives are sent to the national 400-seat legislature. The president of the country is the leader of the party that gets the most votes.

Electoral officials say a tally with 90% of the vote counted may be announced later Thursday, although final results may not be announced until Saturday.