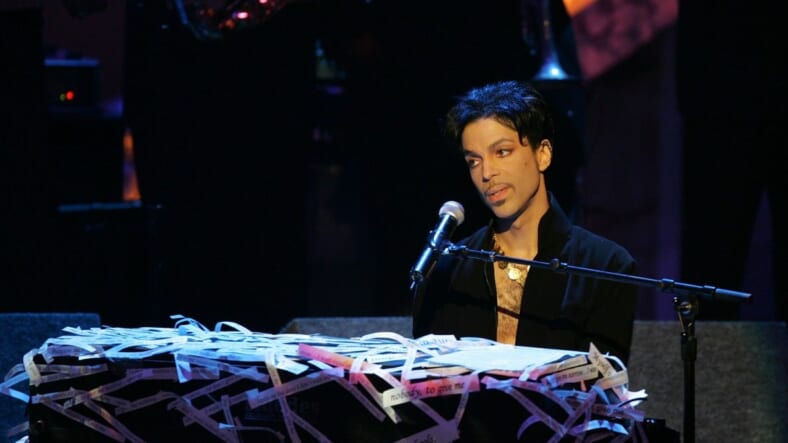 Theater staff at an ’80s tribute event in Glasgow, Scotland, asked a woman dressed as the late Prince and wearing blackface to remove her makeup or leave, the Scottish news website the Daily Record is reporting.

Catherine McBride, 47, a mother of three from Glasgow, was dressed up in purple and white and put some dark makeup on her face as “a bit of fun,” she told the news organization about the event at Glasgow’s Pavilion Theatre.

She said she never intended to hurt anyone and was shocked when staff told her to remove the make up or get out.

READ MORE: Prince memoir ‘The Beautiful Ones’ coming out in the fall

“It wasn’t my intention to upset anyone, although the foundation was pretty dark,” McBride told the Record. “I was only trying to have a laugh and would never have deliberately set out to cause any offense to anyone.”

McBride said, in fact, that everyone else seemed to like her get up. Before the event, she’d gone out with nine friends and people were laughing at her, she said.

“All of my friends were dressed up too, although I was the only one with a dark face,” she explained. “I’ve worn the exact same outfit before at a friend’s birthday party in a local pub and nobody said a word. I was totally taken aback when all of this happened.”

Even when she approached the entrance of the theatre, a staffer complemented her on her “fancy dress” and they both laughed, McBride told the Record.

Apparently, participants at the event were a bit more worldly. A short time after McBride arrived, the theater staffer who’d complimented her at the door said the theater had received a number of complaints about her outfit and the theater wanted her to fix it or leave.

McBride complained she had to rub off the makeup with paper towels.

She pointed out to the news organization that only six people complained.

“I’m certainly not a racist,” she said.