Now all adults, the group that had been convicted of brutally assaulting a New York woman say they are moving forward, but they are still haunted 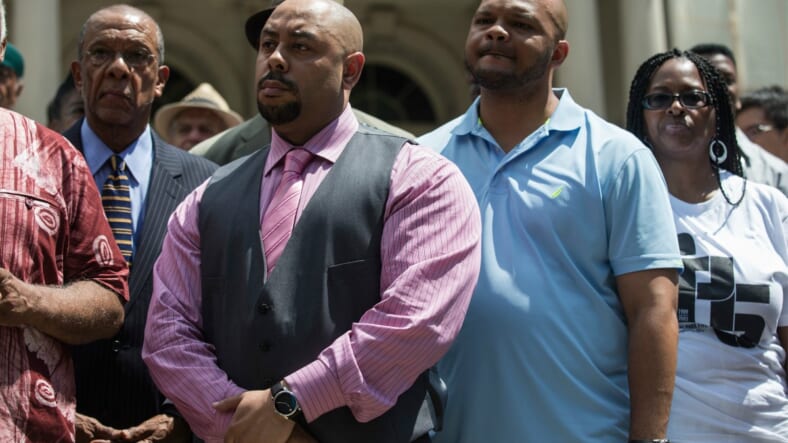 Kevin Richardson (R) and Raymond Santana, two of the five men wrongfully convicted of raping a woman in Central Park in 1989, attend a press conference on city halls’ steps after it was announced that the men, known as the ‘Central Park Five,’ had settled with New York City for approximately $40 million dollars on June 27, 2014 in New York City. All five men spent time in jail, until their convictions were overturned in 2002 after being proven innocent. (Photo by Andrew Burton/Getty Images)

Three decades after they were falsely accused of raping a woman in New York’s Central Park and subsequently being jailed for it before ultimately being exonerated, the Central Park Five say the $41 million they got in a settlement with the city has allowed them to rebuild their lives, but it has not repaired the damage done.

“No amount of money could have given us our time back,” Yusuf Salaam, 44, told CBS News, in an interview with the group, then teenagers, but now all in their 40s. “Every day it’s probably my second or third thought.”

Salaam, along with Raymond Santana, Antron McCray, Kevin Richardson and Kharey Wise, all Black and Latino youths, aged 14-16, were apprehended by police after a white female jogger was attacked and raped on the night of April 19, 1989. Prosecutors used coerced confessions — with them blaming each other — to convict them of the crime and each spent between 6 and 13 years in prison as juveniles.

They were exonerated years later when another individual, Matias Reyes, who was already incarcerated on a different charge, confessed in 2002 that he was the actual attacker. The group sued New York City in 2003 and won the settlement in 2014.

“Even our conversations is [sic] different. It’s not normal. Our conversations would be about prison, how we had to survive in prison,” McCray, 44, said about their lives since the conviction.

Santana, 44, said the money has allowed them to move forward with their lives, somewhat. “We were able to relocate, [and] put our children in better situations,” he said.

But the ordeal remains with them and motivates them to make a difference for their own families.

“Is there a life lesson for what you’ve been through,” asked CBS News correspondent Maurice DuBois.

“Truth,” McCray replied. “I preach to my kids, ‘Just tell the truth. Be true to who you are.’ Honestly, the last time I lied, [it] got me seven-and-a-half years for something I didn’t do.”

Director Ava DuVernay is bringing the Central Park Five story to life in an upcoming Netflix series titled: When They See Us due to begin streaming May 31.

The four-part series will span from the time when the boys were first questioned about the incident, to their exoneration and eventual settlement.

“My goal was to humanize boys and now men who are widely regarded as criminals. And in doing that, to invite the audience to re-interrogate everyone that they define as a criminal,” DuVernay told CBS News.

She continued: “I’m asking the question to everyone, ‘What do you see when you see black boys?’ And that’s a painful answer, because I know what the answer is for many people.

“It’s exactly what these boys were called: wolf pack, animals, criminals, so much so that they could be tossed aside on a case that was made from a complete lie.”

READ MORE: First Look — ‘When They See Us’ chronicles the harrowing story of Central Park Five