TalkBack: Sacha Jenkins on Part 1 of ‘Wu-Tang Clan: Of Mics and Men’

The Showtime series is now available to stream. 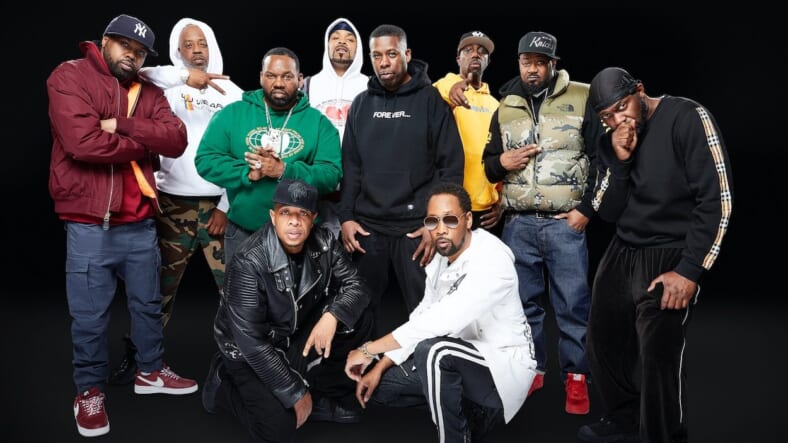 Showtime
Wu-Tang Clan: Of Mics and Men,  debuted on Showtime on Friday and invited the masses into the world of Wu-Tang.
Throughout the history of hip-hop, no single group changed the game in the same way the Wu-Tang Clan did. In the early ’90s, a group of young rappers from Staten Island and Brooklyn joined forces to escape the poverty, violence, and oppression of their neighborhoods through music. Hot off the success of their single “Protect Ya Neck,” RZA, GZA, Ol’ Dirty Bastard, Inspectah Deck, U-God, Ghostface Killah, Method Man, Raekwon da Chef, and Masta Killa “formed like Voltron” to release Enter the Wu-Tang (36 Chambers), a seminal album that redefined a genre and forever changed the economics of the industry.
Director, Sacha Jenkins poignantly captures their struggles and triumphs in intimate detail, creating a group portrait that transcends music and delves into broader themes of race, economic strife, and brotherhood while weaving their distinctly raw and resonant sound throughout the four-part docuseries.

Each week, he will share his thoughts on the latest installment and what went in to creating the masterpiece.
Part 1 of Wu-Tang Clan: Of Mics and Men showed the guys reuniting in a theater and reminiscing about how they forged a friendship that led them to become one of the most influential hip hop groups ever. Here’s what Jenkins had to say about making the reunion happen.
“Getting the Wu together isn’t easy. The days of the guys being spread out mainly between two housing projects in Staten Island are long gone. I needed a way to corral the cats, so to speak. Turns out that getting them together in the dark to watch moments from their collective and individual past created a womb-like intimacy. Here, we see the inter workings of a powerful family. And like with most families, everyone is not always on the same page. People disagree. Sometimes they argue. Still, at the end of the day, family is family. Their bond is strong. Their brotherhood is undeniable. The energy in the room was kinetic, but also very emotional. They felt comfortable watching moments that were sometimes uncomfortable.”
Jenkins reveals he was just a moved as all of us by Wu-Tang’s discussion of their childhoods in Staten Island.
“To me, learning about Staten Island and their experiences growing up there—that was a real revelation. I imagine things have changed there somewhat. There was a street naming—the Wu-Tang Clan District—that just happened there. I’m not saying that all of this was on the forefront of their minds—racism, a spotty educational system and the crime that would later play a role—but seeing how all of the obstacles that they faced there made them stronger and more determined—that’s very inspiring to me.”
On capturing the true meaning of Wu-Tang’s work:
“I’ve always wondered if white People—and non New Yorkers in general—truly understand what the hell the Wu were talking about in their music. But with all hip hop, the only way to truly understand it is to consider and process the environment from which it came. That was my mission with the film. I’m not saying you can’t just take Wu-Tang at face value—yes, sonically the shit is bangin’! I’m not saying that you can’t just enjoy Wu-Tang for the beats and rhymes. To me though, the most important part of the equation is life,” he explains.
“As Inspecta Deck has so eloquently stated on “C.R.E.A.M”, “Life as a shorty shouldn’t be so rough.” Hip hop, just like all black music made in America, is a reflection of and a reaction to the environment from which it was born. You can’t properly tell a hip hop story without touching the ‘hood and where it sits in the gut of America.”

Check back for more insight from Sacha Jenkins after Part 2 of Wu-Tang Clan: Of Mics and Men airs May 17 on Showtime.