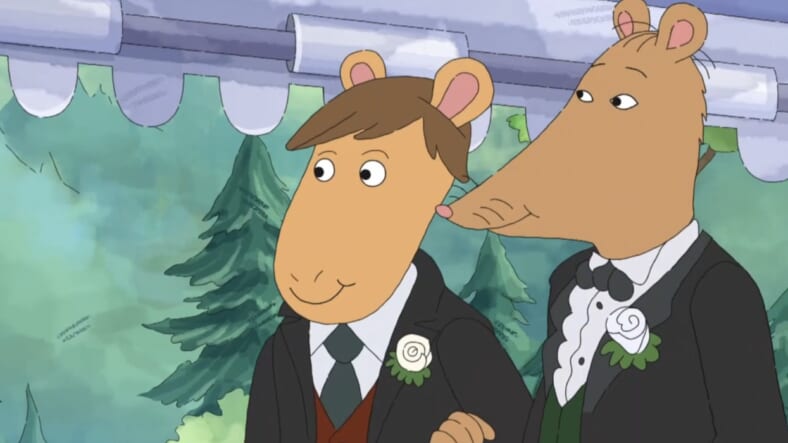 With criticism already focused on Alabama after a restrictive abortion ban was passed last week, public television stations in the state are now refusing to air an episode of a favorite animated show that depicts a gay wedding.

In the Season 22 premiere of the cartoon show Arthur, a gay character, Mr. Ratburn, was to be wed to his partner in the episode “Mr. Ratburn and that Special Someone.”

But Alabama Public Television director of programming Mike McKenzie told several media outlets that viewers would have objected to seeing depictions of same-sex relationships — even the animated kind — isn’t what his viewers want to see right now. So they pulled the plug to proactively ward off the objections they expected to receive.

“Our concern is with the subject matter, the marriage of Mr. Ratburn and the other gentleman,” McKenzie explained to The Wrap. “We have a fairly large number of people who have a problem with teaching that to their children.

“Many parents feel that Mr. Ratburn’s marriage conveys a positive message that they think is appropriate for their children. Many other parents disagree, either because their children are too young, or because of their beliefs,” he added in an email.

According to AL.com, McKenzie was notified by PBS and WGBH, the Boston affiliate that produces the show about the episode in mid-April. The decision was made then to show a rerun and not air the episode later.  He says those who wish to see the episode can easily view it on PBS.org.

“The vast majority of parents will not have heard about the content, whether they agree with it or not, and our greatest concern was taking away these parents’ choice,” he said.

APT had previously pulled an episode of the Arthur in 2005 when a character, Buster, visited a girl who had two mothers.

APT’s decision was instantly slammed by LGBTQ rights organization GLAAD, with the organization characterizing the choice not to air the landmark episode as, “mean-spirited,” and a “losing battle.”

“TV worlds often reflect our actual world and today that includes LGBTQ parents and families,” said President and CEO Sarah Kate Ellis. “LGBTQ parents and their children deserve to see themselves reflected in media and if leadership of this public broadcasting station cannot serve the interests of the entire public, it’s time to find someone who can.”