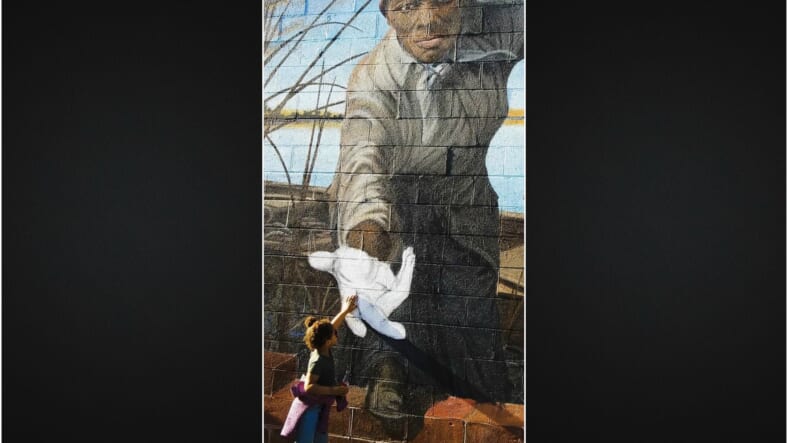 A photo showing a little girl extending her arm out to a mural of Harriet Tubman in Dorchester County, Md., has gone viral after social media users shared their reactions of the powerful image, according to Yahoo.

The picture of the little girl, Auriah Duncan, 3, also known as “Lovie” was taken as she was walking with grandparents Tracy and Tammy Lyndee downtown when they saw the mural of Tubman.

The mural is found on the Harriet Tubman Museum & Education Center’s wall located in Cambridge, according to NBC Washington. It was painted by artist, Michael Rosato. Tracy said once the girl saw the painting of the abolitionist leader she was startled at first, but definitely captivated.

“She loves to walk around town with us on pretty days to look and explore,” Tracy explained. “When she saw the mural it startled her for a moment because she wasn’t expecting it. Then she quickly asked if she could give her a high-five. She reached out and placed her hand on the hand. The response has been tremendous.”

Tracy posted the image of Lovie on the Facebook page with the caption,” Lovie meets Harriet.” The image has since received thousands of responses from social media users and the Harriet Tubman Museum & Educational Center online.

READ MORE: Canada places Black woman on $10 bill before America can do right by Harriet Tubman

“We think this mural will be providing a lot of powerful moments like this!” a post from the museum states.

The post already has over 9,000 likes on the museum’s page. It has also been shared on Twitter and Instagram, receiving thousands of likes and comments. Many users commented saying the image deeply moved them.

Rosato, who just finished completing the mural on Monday, told News4 that he is “overjoyed” with the feedback of both the mural and the photo.

“That’s exactly what I wanted to happen when I conceptualized the design. I was blown away,” Rosato said.”People were coming up to look at it. People were really reacting to it. I knew that it was striking a cord.”