This latest dust-up is about Oreos. The joke is too easy, man. 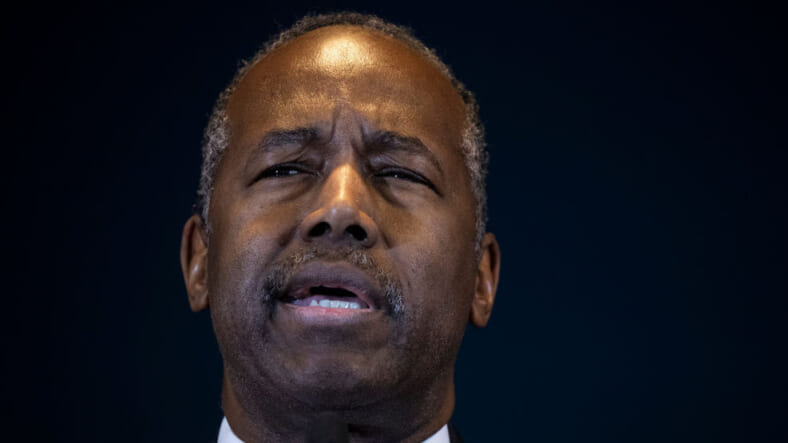 NEW YORK, NY - JANUARY 31: Ben Carson, Secretary of Housing and Urban Development (HUD), speaks after signing a ceremonial agreement between the federal government and the City of New York intended to correct mismanagement of the New York City Housing Authority (NYCHA), during a press conference at the Jacob Javits Federal Building, January 31, 2019 in New York City. The agreement paves the way for the appointment of a federal monitor to eventually replace the current interim chairman of NYCHA. (Photo by Drew Angerer/Getty Images)

Ben Carson has sorely disappointed his fair share of Black folks, but he’s invited a special degree of heartbreak from us native Detroiters of a certain age.

Carson was born and raised in the Detroit of the 1950s and 1960s. His 1990 autobiographical novel, Gifted Hands: The Ben Carson Story was damn near required reading in every Detroit Public School. You couldn’t walk in any library or classroom without seeing a dog-eared copy laying around somewhere.

Gifted Hands is the story of a Black boy from a broken and troubled family who surmounted all odds and grew up to become an accomplished neurosurgeon. Carson was a beacon of determination and an example of the benefits of hard work and education for young and impressionable Black Detroiters of the Bush 41/Clinton era.

READ MORE: How does a Mississippi mayor plan to get rid of crime? Offer criminals cash

But in 2013, he fixed his pie hole to tell people that Obamacare was “worse than slavery.” And that was just the beginning of our desire to throw our copies of Gifted Hands in the fireplace.

He ran for president in 2016 on the Republican ticket and with a highly morally conservative bent that made us all wonder if the Carson we saw talking shit on television daily wasn’t the Tethered version, swapped out when no one was paying attention and replaced with a demented doppelgänger perpetually drugged with codeine and unable to keep his eyes open while talking.

Carson said he wouldn’t vote for a Muslim president because they can’t exercise democracy and their faith at the same time. He defended the Second Amendment with the wild suggestion that the Holocaust would have been “greatly diminished” if only the Jews had guns to defend themselves. Those are only a couple of his greatest hits.

As we all know, Carson’s presidential campaign was an atomic failure and he saw little recourse but to climb in bed with President Gomer Pyle, who appointed him Housing and Urban Development (HUD) Secretary. Which is the equivalent of my writerly ass being hired to run a retirement home. Carson’s been quiet for a while, but like a small child in the other room who suddenly stops making noise, you know some bullshit is afoot.

He’s currently in the news regarding his cataclysmic testimony before Rep. (and Auntie) Maxine Waters’ Financial Services Committee Tuesday, during which he demonstrated exactly why a f—ing neurosurgeon is in no way qualified to manage urban housing.

When Rep. Katie Porter asked him about REO (Real-estate owned) foreclosed properties, Carson responded, “Oreos?” Because, of course, Porter would spend time asking Carson about sandwich cookies in committee. I could get into the delicious irony of Carson’s sellout ass talking about Oreos, but I’ll digress.

I asked @SecretaryCarson about REOs – a basic term related to foreclosure – at a hearing today. He thought I was referring to a chocolate sandwich cookie. No, really. pic.twitter.com/cYekJAkRag

The rest of the testimony was just as much of a shit show: Carson defended a Trump budget proposal that will knock 16.4 percent from HUD’s budget – which would obviously negatively impact people who need housing protection the most – as well as a plan to cut undocumented immigrants off from public housing aid. Rep. Ayanna Pressley had her little dance with Carson, who dodged her questions about the ethical implications of cutting the budget like I imagine he would any invitation to speak in Detroit in 2019.

READ MORE: Ben Carson tries to invoke “Reclaiming my Time,” but Maxine Waters shuts him down

CLIP: Complete exchange between Rep. Pressley and Secretary Carson.@SecretaryCarson: “Reclaiming my time.”@RepPressley: “You don’t get to do that.”

Carson: “Oh.”@RepMaxineWaters: “The time belongs to the gentle lady.” pic.twitter.com/HFlS749tji

Carson is different from the likes of Candace Owens and Alan Keyes, who introduced themselves to the world as golliwog dolls hell-bent on making the ancestors frown upon them while doing the Arthur fist meme.  For many Black folks, Carson was once the Chosen One. Now, he’s Anakin Skywalker going down the path to the Dark Side and becoming Darth Vader. He’s the equivalent of the last two seasons of Game of Thrones: started off with so much promise only to let you the f— down.

He’s now simply a cautionary tale; a reminder to drag your expectations so abysmally low that you can never be disappointed. Treat Carson – and the rest of the Trump administration – like you do online dating and maybe you’ll be able to sleep at night. Maybe.