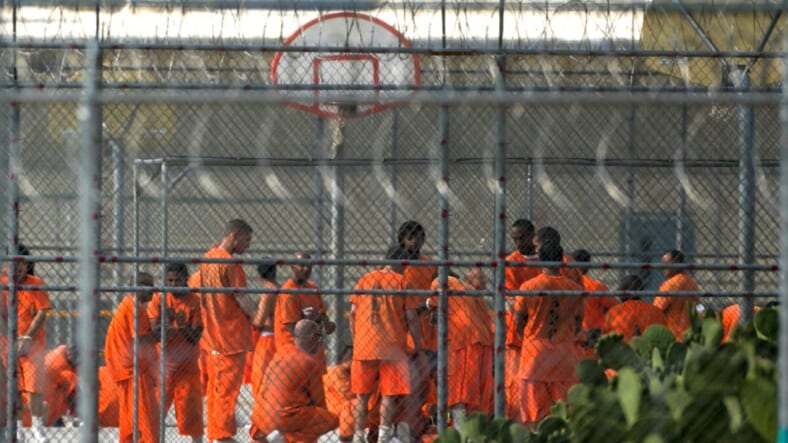 Harvard research shows that dark complexioned Blacks are have a higher likelihood of being imprisoned and explores why. (Patrick Breen/The Arizona Republic via AP, File)

When it comes to the cause, their energy is boundless, Barnett through her Buried Alive Project and Cody as founder of The Decarceration Collective. And they’re immensely grateful to Kim Kardashian West for joining the fight, catching some headlines in the process.

Barnett, who lives in Dallas, and Cody, based in Chicago, have spent years in the prison reform struggle, both after spending time in corporate law.

“At a basic level, I’ve always been interested in how courts and judges wrestle with human stories of the people standing in front of them, which drew me to contesting and attacking mandatory minimum sentences. Because when you have mandatory minimums, judges can’t even consider their personal stories,” Cody told The Associated Press.

It’s that “erasure of the historiography of people” that keeps her going, said Cody, also lead counsel of her nonprofit collective of lawyers, community organizers and criminal justice policy experts.

The organization Barnett co-founded does similar work, representing individuals in court in pursuit of second chances, educating policymakers on the need for legislative reform and sharing stories to humanize those convicted to break the stigma of incarceration.

Kardashian West, who is now studying law while running her beauty business and continuing on reality TV, first learned of Barnett’s work when she stumbled on an interview with Alice Marie Johnson from prison and tracked down the Tennessee grandmother’s legal team, which included Barnett.

President Trump commuted the mandatory life sentence given Johnson, a first-time offender convicted in a cocaine conspiracy case, after a visit to the White House by Kardashian West. After, Trump signed a bipartisan compromise on federal prison reforms late last year. That’s when Barnett and Cody joined forces on a 90-day effort to free as many federal inmates as they could under the new rules.

The two secured releases for 17 offenders.

“It was literally a dare over text,” Cody said of the idea. “It was like, hey girl, let’s get some people out of prison. We were arguing motions in courtrooms that were completely unfamiliar to us. Kim knew we were doing this for free. We were probably halfway into the project, not paying ourselves, and with no money and no funding.”

Barnett has known Kardashian West for nearly two years, since the star took up Johnson’s cause. She offered to help fund the 90 Days of Freedom campaign when the usual big donors would not.

“It was like, OK, let’s link arms. We need all the help we can get,” Barnett told the AP. “She has always volunteered her resources. I’ve never asked Kim for a dime.”

Barnett and Cody will launch a new initiative, the Third Strike Project, on June 19. It’s aimed at offenders in their database left behind under last year’s measure, the First Step Act, which retroactively made inmates convicted in crack cocaine cases eligible for consideration to receive reduced sentences.

“We have a client who’s doing mandatory three strikes life for marijuana. The First Step Act didn’t help him because it didn’t cover marijuana,” Cody said. “Maybe they had a high amount of a different kind of drug. Maybe it was cocaine powder and it was 5 kilos. We couldn’t go back and retroactively ask the judge to lower their life sentence.”

According to The Buried Alive Project , 3,834 people were sentenced to life in federal drug cases between 1988 and 2016. Of those, about 63 percent were black and 17 percent Hispanic. Overall, 46 percent were 46 years old and older.

Barnett and Cody have spent time fielding criticism among their own supporters online who are troubled by the attention Kardashian West has received.

“We tell our truth, and the truth is Kim linked arms with us when other people turned us down. We consider her a partner,” Barnett said. “People are missing the bigger picture, which is that someone with the celebrity and platform Kim has is actually raising awareness for issues that many of us care about and many of us have been working on for a long time. We welcome anyone who wants to join this fight.”

The fight, for her, is personal. Barnett’s mother, who had a crack addiction, served three years. Barnett and her sister would shuttle several hours back and forth for prison visits.
Then, while she was in law school, Barnett came across the case of Sharanda Jones, who was sentenced in 1999 to mandatory life without parole for her role in a drug conspiracy, her first arrest and conviction. After nearly 17 years behind bars, Jones became one of seven inmates for whom Barnett secured clemency from President Barack Obama.

Jones is a co-founder of Buried Alive. She was also a close friend of Johnson in prison.
Cody founded The Decarceration Project after serving as a federal defender. She wrote one of the first clemency petitions granted by Obama, in 2013, for Reynolds Wintersmith Jr., who was 19 when arrested and later sentenced to mandatory life under sentencing guidelines of the time. He served 20 years.

“His mother had overdosed from drugs. He was sent to live with his grandmother, who was abusive and taught him how to sell and cook crack,” Cody said. “It was an entire story of systemic failure.”

She earned clemency in six more cases before Obama left office, and she praised those in Congress who supported First Step last year.

“Brittany and I say from the courtroom to Congress to clemency, we will show up and advocate for people who are serving life,” Cody said. “We’re talking about mass incarceration, human beings in cages for life. At the end of the day, I have nothing left for any other conversation.”