With so much African American presence among Democratic presidential candidates, Blacks in Iowa are emboldened as they plan for the state's crucial political caucus 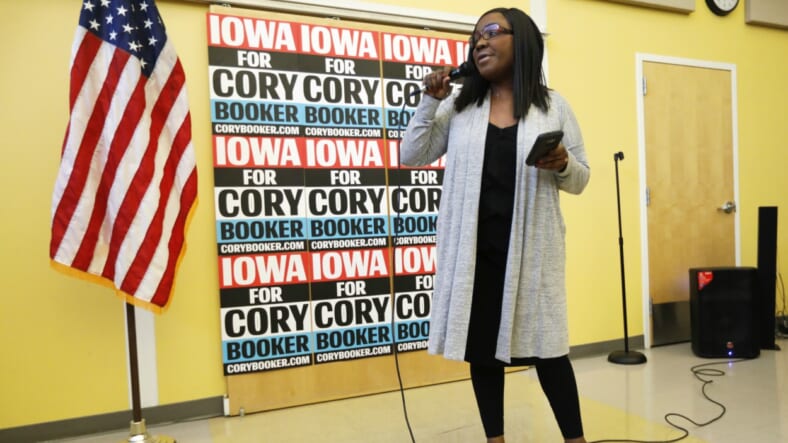 DES MOINES, Iowa (AP) — In Iowa, one of the whitest states in the nation, more than 100 Black Democrats who expect to attend the 2020 caucuses crammed into a tiny community center in the capital city to position themselves as a force in the most wide-open presidential campaign in a generation.

“There is hope! There is hope, I tell you, the same hope that Barack Obama brought us,” Jamie Woods, former chairwoman of the Iowa Democratic Black Caucus, implored the cheering group last month.

In the state where Obama’s 2008 candidacy cleared its first important hurdle, Black Democrats are energized as seldom seen, in part motivated by overwhelming dissatisfaction with President Donald Trump. That enthusiasm could make a difference in a state that holds a presidential caucus, which, unlike an open primary, attracts only the most motivated voters. That means a candidate who can rally more Black voters in the caucuses can gain an outsized advantage, even though African Americans make up only two percent of Iowa’s population.

READ MORE: Most Democratic voters say race not a factor in 2020 campaign

Iowa’s caucus, coming next February as the first event in the Democratic Party’s presidential nominating contest, is an early test of how voters are going to respond to two dozen candidates and could be a harbinger of the primary a few weeks later in South Carolina, where African Americans comprise most of the Democratic primary electorate.

“They’re realizing that their voice needs to be heard,” said Deidre DeJear , the first African American to win a primary for statewide office in Iowa and now state chairwoman for Sen. Kamala Harris’ 2020 presidential campaign. “And they are using the platform they have whether they’re elected or whether just a regular voter.”

Stacey Walker, the first Black county board chairman in Iowa’s second-most-populous metro area, said she hasn’t seen this kind of energy among Black operatives, activists and officeholders in Iowa in years.

“Not since the Obama coalition have we seen so many persons of color actively engaged and inspired by our politics,” Walker said. “It hasn’t always been this way, and certainly not in Iowa.”

Giving an early indication of the energy within this small but influential segment of the caucus electorate, more than 200 black Democrats braved a driving ice storm in February to attend the Iowa Democratic Black Caucus winter fundraiser at a north Des Moines union hall.

Harris met privately with state Rep. Phyllis Thede, who is African American, before the four-term lawmaker moderated a campaign event for the California Democrat in eastern Iowa earlier this year.

In 2008, when Obama became the first African American to win the Iowa caucuses, 4% of caucus participants were Black, double the percentage of the state’s overall black population. Obama received 76% of the black vote on caucus night.

Non-Black candidates are working to attract influential Black supporters, who can help make the difference in a close race, especially given the crowded field.

Multiple Black candidates in the race and the outreach by others in the crowded field create a different scenario than in 2008, when Obama was the only Black candidate.

What’s more, most of the candidates put ending racial disparity in income and criminal justice atop their agendas.

“Even though we’re talking about racial disparity and white supremacy, and all this is bad, that this isn’t who we are. No one single candidate is leading the charge,” said Guy Nave, a Democrat from Decorah who is black and plans to attend the caucus.

Iowa Democrats are predicting turnout in the 2020 caucuses will beat the record 237,000 set in 2008, as Trump’s approval in Iowa has struggled to top 50 percent. Meanwhile, candidates themselves are working to attract first-time caucus participants to eke out any advantage in a field that now numbers 23.

That means even a narrow edge of support from African Americans, in combination with a coalition of other voters, could make the difference for the winner in Iowa next February, said former Iowa Democratic Party executive director Norm Sterzenbach.

“If you can find a candidate that has a stronghold in a particular demographic and is able to turn them out, that could turn into something extraordinary on caucus night,” said Sterzenbach, who is advising former Texas Rep. Beto O’Rourke’s presidential campaign.