OPINION: When former First Lady Nancy Reagan told a generation of children to 'Just Say No' to drugs, she really launched a government assault on African Americans 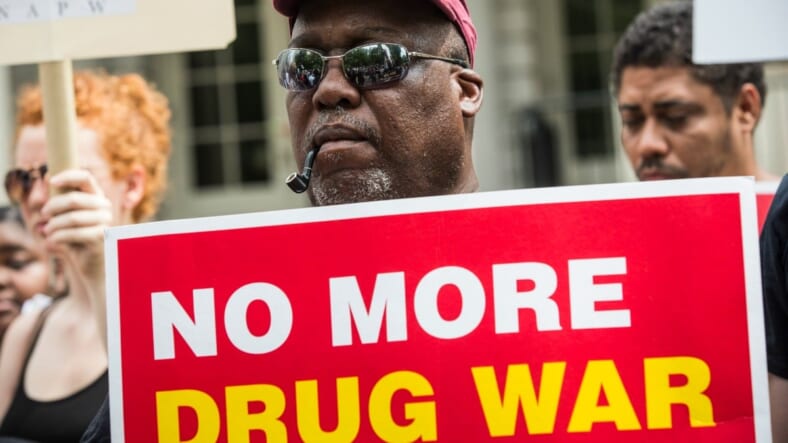 People protest on the steps of New York City Hall in support of the proposed Fairness and Equity Act, which would attempt to reform racially biased arrests in regards to marijuana possession in New York state. Now, Seattle is now taking a bold action to vacate hundreds of marijuana-related convictions that occurred within a 14 year period. (Photo by Andrew Burton/Getty Images)

“Wait – you smoke weed?! I’m so surprised. I didn’t think you were that type.”

Cannabis has quickly become big business in America, worth more than an estimated $10 billion and growing. But as white farmers and corporations continue to get rich off the drug, when it comes to marijuana, many people of color, Black people specifically, still find themselves harboring outdated beliefs.

It is a shame not only from an economic empowerment standpoint, but also because those little green buds some see as a hobby for low-class “thugs” with no ambition, also represent one of the biggest examples of how corrupt politicians have very directly (and effectively) destroyed our communities — while convincing us to blame each other.

For a multitude of reasons, it’s time that we all re-evaluate and redefine our relationship with marijuana. But before I get into all that, let’s take a quick trip back to the 1980’s, which coincidentally, is also the last time we let a television personality run our country.

Nancy Raegan lied to all of us

Back in the 80’s, Nancy Reagan launched the “Just Say No” campaign which would eventually became her signature issue and a defining legacy for both her husband, President Ronald Reagan  and herself.

In those days, many impressionable children grew up with the image of a perfectly coifed First Lady staring solemnly into the camera as she repeated the catchy three-word phrase through our television sets and into our psyches.

During that same time the D.A.R.E programs – which were founded by then-Los Angeles police chief Daryl Gates, who believed that “casual drug users should be taken out and shot” — were implemented in schools across the nation, in spite of their glaring failure rates.

Just like that a whole generation was spoon-fed overgeneralized, misleading, anti-marijuana, propaganda that would set the stage for decades of (unchecked) racially biased drug arrests focused on the Black community.

But before we get into how the Reagans convinced y’all to judge your otherwise law abiding cousins for peacefully smoking a joint (as opposed to the more socially acceptable practice of getting drunk at happy hour to the detriment of their livers) let’s rewind even further back and talk about to how and why this “war” initially started.

The ‘War on Drugs’ was always a smoke screen

While on the surface this may seem like a very well-meaning and presidential course of action, one of the main architects of Nixon’s drug policy, Attorney General John Mitchell, would later come clean and admit that war on drugs was always meant to be an attack on liberal “hippies” and Black people.

READ MORE: Is the ‘Strong Black Woman’ stereotype killing us? A study says yes, but there are alternatives

“We knew we couldn’t make it illegal to be either against the war or Black, but by getting the public to associate the hippies with marijuana and Blacks with heroin – and then criminalizing both heavily, we could disrupt those communities,” Ehrlichman confessed.

“We could arrest their leaders, raid their homes, break up their meetings, and vilify them night after night on the evening news. Did we know we were lying about the drugs? Of course we did.”

So there you have it – direct from the horses mouth.

The “war on drugs” was quite literally meant to take down Black people from day one. While white Americans were being told to fear scary drugged out Black people, the real bad guy in this was free to go unchecked.

As grandiose as the above statement sounds, it is not a conspiracy theory. Because the current C.I.A. (thanks to the investigative work of an incredibly brave — albeit flawed journalist) was eventually forced to admit that for more than a decade it protected its Nicaraguan allies from being prosecuted for smuggling cocaine into the U.S.

If you’ve ever gone to California and driven past the drug addicted homeless community on Skid Row, please know that in that moment you are staring at the legacy of your country’s complete failure to protect Black people from their crooked allies.

“Freeway” Ricky Ross (the former drug kingpin – not the rapper) was able to take his South Central L.A.-based crack businesses national thanks to his access to a cheap supply of coke from Nicaraguan suppliers who were being protected by the U.S. government.

If you do some research on a U.S. backed and funded Nicaraguan right-wing rebel fighters called the Contras, you’ll quickly see how our country decided to get in bed with a group that was secretly getting money funneled from Iranian arms deals in what later became known as the Iran-Contra Affair. But which was later revealed to also be linked to drug trafficking in urban America.

In plain English this means the American government knowingly turned a blind eye while their allies pumped drugs into Black neighborhoods. They literally let hard drugs destroy millions of Black lives as part of their deal with the Contras, and are therefore directly complicit in creating the crack-cocaine epidemic that has ravaged urban communities for generations.

The video below is cued up to the exact segment of an interview, where Rick Ross himself admits to his role in all of this.

The evidence for all this is pretty plain these days. But back in the 80’s when Reagan was in office, and inherited the blueprint for this sinister plot from Nixon — they still had an image to uphold.

So exactly how do you convince the public not to connect the dots and start asking questions about how so much crack suddenly appeared on our streets out of nowhere?

Simply distract them with a smear campaign against marijuana; the easily accessible, wonder drug with a host of medicinal benefits that was already popular among stressed out Blacks and liberals who couldn’t afford insurance. Turn that non-deadly and inexpensive alternative to all the pricey pharmaceuticals on the market into the bad guy instead. And then get the demure, harmless looking First Lady to become the poster child for this smoke screen.

It was an evil plan straight out of a blockbuster film, except this time, the villains ended up getting away with it. And by the 90’s kids and parents all over the nation were saying, “Just Say No!” without a clue that it was all just one big distraction.

I often use the term “systemic racism” as a generalization, but this is a very specific example of how the system has intentionally stacked the deck against Black people. While then posing disingenuous questions like, “Why are so many inner city negroes strung out on drugs?” as if they had nothing to do with it.

But anyways…. history lesson over. Let’s go back to Nancy Reagan and what happened after she convinced us to see weed as the enemy.

Ripping Black families apart when law at a time

Once Nancy Reagan did her part rebrand marijuana as “the gateway drug”, that shift in public perception gave President Reagan the momentum he needed to pass oppressive drug laws that hyper focused on specific communities.

I feel like by this point in the story you can take a wild guess which communities got the brunt of this punishment.

Today we would intelligently ask, “On what planet do marijuana and heroine ever belong in the same sentence?” Because objectively speaking, that’s literally like grouping Tylenol with Meth. But back then, most Americans were intentionally kept in the dark on the difference between hard and soft drugs.

That same year, Reagan’s Executive Order 12564 also authorized drug testing for all Federal employees – even though the president’s own counsel later acknowledged that federal courts had ruled mass testing programs are unconstitutional. But the constitutional rights of federal employees were de-prioritized because the corrupt “war on drugs” was considered more important than the civil liberties of individual citizens.

And as for all those people living in urban communities plagued by unchecked, government-affiliated drug dealers? You’d think as some sort of restitution they’d be treated as victims and be provided with assistance to get clean right?

Well, unfortunately that sort of reasonable response is only reserved for white communities where things like “the opioid epidemic ” make the cover of Time Magazine as we’re asked to show compassion for white citizens who fall prey to addiction.

In the 80’s though, Black folks were further victimized by laws literally drafted up to scoop them off the streets and hide any evidence of the CIA’s illegal activities. These laws included things like crack sentencing guidelines that stipulated that anyone possessing just 5 grams worth of crack (the size of two sugar packets) could receive an automatic 5 years in prison.

Just like that, for decades our prisons became filled with low-level drug users; further cementing the narrative that Black people have some sort of moral shortcoming that makes them more prone to being incarcerated. But we don’t have a moral shortcoming folks — this was all done by design. We were targeted.

And the biggest irony of all this is that although Black families continued to be torn apart over dime bags, Nancy Reagan’s own daughter, Patti Davis admitted to once being a hard drug user as a teen, yet somehow managed to maintain her freedom.

So yeah, on the April marijuana holiday known as “4/20” (or any other day of the year to be honest), if you see someone Black lighting up a joint and minding their business – check yourself before rushing to judgment.

After reading this article, and hopefully doing some of your own research, you might even find yourself needing a puff too.