With news and concern over U.S. deaths at the resort where he is planning his yearly event, the entertainer is reportedly making an abrupt, but possibly necessary move 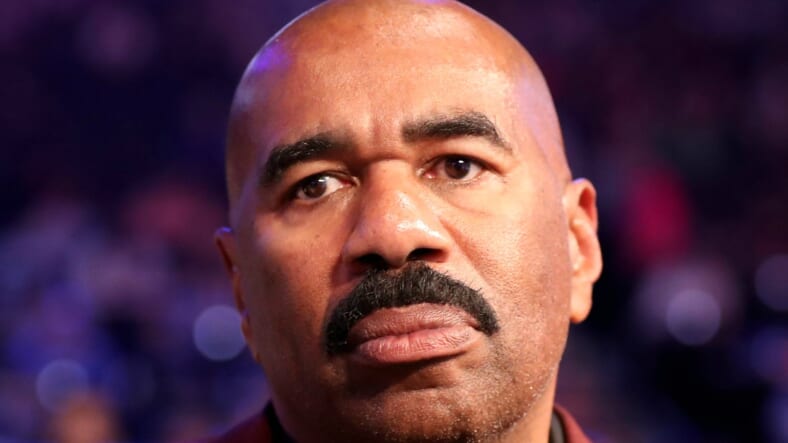 This story has been updated…

Comedian Steve Harvey has reportedly decided to move his third annual Sand and Soul Festival out of the Dominican Republic amid increasing concerns over the unexplained deaths of American tourists over the past year.

Insider.com is reporting that an email sent Thursday to ticket holders by festival organizers said that the event location would be changing from the Hard Rock Resort at at Punta Cana, D.R., to a new locale that will be announced soon.

READ MORE: Bodies of couple who died in Dominican Republic return to Maryland

“There has been a lot of negative media in the recent weeks surrounding the Dominican Republic and its safety for tourists to travel. We want you to know that higher than anything, we regard your safety as most important. This is why it has been an easy decision for us to move the Sand & Soul Festival out of the Dominican Republic this year,” Morgan Hawthorne, executive producer of the event wrote in an email to ticket buyers. She noted that they are trying to provide customers “with a travel experience that is equal to, if not superior to the quality you would have received at the Hard Rock Resort.”

Harvey’s team had earlier said that guest safety was of the highest priority but had not made any announcements publicly about moving the event. When contacted by theGrio, a representative of the Sand and Soul Jazz Festival declined comment, saying only that an official update would be released next week.

Including the two U.S. tourists have died while at the Hard Rock resort, at least nine people have been found dead or killed under dubious circumstances while visiting the nation, which shares the Caribbean island of Hispaniola with Haiti, located to the west.

A Dominican Republic official downplayed the deaths as coincidences, calling them “fake news,” according to The New York Post.

“It’s all a hysteria against the Dominican Republic, to hurt our tourism, this is a very competitive industry and we get millions of tourists, we are a popular destination,” Carlos Suero, the Dominican Republic’s Ministry of Public Health spokesman told Fox News in an interview.“People are taking aim at us.”

He maintains that tests of liquor, food and areas involved with the deaths came back negative. The U.S. State Department has said that it is monitoring the situation.

Editor’s Note: This story is an update of an earlier article. The original article is posted below.

Despite as many as nine people mysteriously dying while vacationing in the Dominican Republic since 2018, Steve Harvey is not letting the deaths stop him from hosting his annual jazz festival in the Caribbean nation.

The third annual Steve Harvey Sand and Soul Festival is set to take place October 10 to October 14 at the Hard Rock Hotel and Casino in Punta Cana. This is the same resort that recently made headlines after two U.S. tourists died while staying at there within the last year, Business Insider reports.

The official website for the festival describes the event as “The Ultimate Columbus Day Getaway featuring an All Inclusive 5 Star Resort with Action Packed Events,” including live comedy shows and music performances by Anthony Hamilton and Ginuwine.

It remains unclear if refunds will be offered to people who bought tickets but no longer want to travel to the country amid news of the recent deaths at the resorts.

The deaths at the D.R. resorts include two at the Hard Rock Hotel. David Harrison, 45, of southern Maryland was vacationing at the hotel when the fell ill and suddenly died last July. Relatives of Robert Bell Wallace, 67, of California, spoke out after he died in April. Bell reportedly became sick after having a drink from his hotel room minibar while staying at the resort for his stepson’s wedding.

But also a New York couple, Orlando Moore, 40, and Portia Ravanelle, 52, who were vacationing there in March went missing and turned up dead after a car accident on the way to the airport to meet their flight home. A Maryland couple,  Edward Nathaniel Holmes, 63, and Cynthia Ann Day, 49, were found dead at the Playa Nueva Romana resort, according to a statement released by the resort.

Further, Boston Red Sox legend David Ortiz was shot and wounded while visiting his home country, which shares an island with Haiti. Six men have been arrested in connection with that incident, which was reportedly a case of mistaken identity.

Within the last year, there seems to be endless suspicious cases of tourists getting sick and dying in the Dominican Republic. So naturally, travelers have voiced concerns over booking future vacations in the country.

Harvey’s festival will still forge ahead. The comedian nor his reps have responded to requests for comment on the upcoming festival, but on June 18, Hard Rock officials released a statement obtained by Los Angeles magazine stating “the safety and health of our guests is now and has always been our highest priority.”

READ MORE: Black lives under attack in the Dominican Republic: Why this crisis deserves our attention

The statement goes on to note that the company is currently implementing “beverage protocols, including purchasing sealed and unopened products from licensed and reputable vendors, as well as daily inspections of all products served throughout the hotel bars and in-room liquor dispensers.”

Adding, “our team members are trained to inspect all supplies, equipment and products that enter the property.”

Meanwhile, travel analysts are warning Americans of the risks of visiting the Dominican Republic, and what to be aware of if you do.

The U.S. State Department has issued a travel advisory warning visitors to “exercise increased caution” due to a rise in crime in the nation.