Marsai Martin won Innovator of The Year at the event. 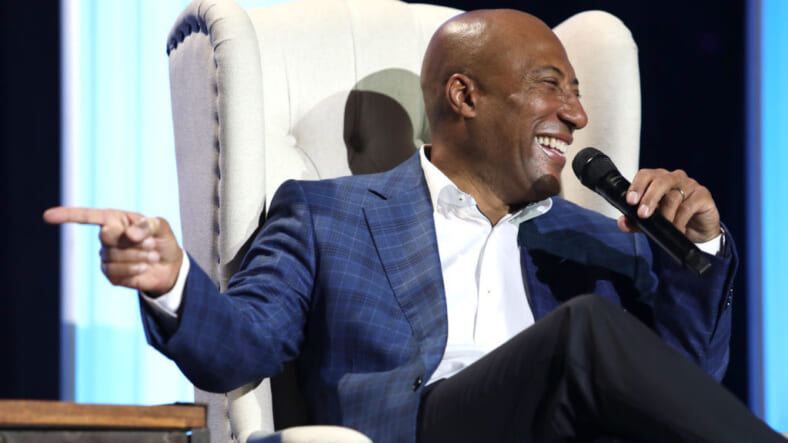 Byron Allen brought the star-studded crowd to its feet when he was honored with the ICON Award at the annual Culture Creators Innovators and Leaders Brunch at the Beverly Hilton on Saturday.

The founder, chairman, and CEO of Entertainment Studios (parent company of TheGrio) dropped tons of knowledge when he sat down with TheGrio‘s CCO, Amy Barnett for a fireside chat prior to accepting the award. “Money is not the commodity. You are the commodity,” he told the crowd full of celebrities and industry insiders before explaining how he started his company after being fired from a job for asking for equal pay.

Byron Allen proceeded to discuss the importance of economic equality and revealed how his groundbreaking idea to purchase of The Weather Channel came to fruition. His inspiring story brought stars like Michael Ealy, Ryan Destiny, Lalah Hathaway, and more to their feet, with the entire room giving him a standing ovation more than once during the chat.

black-ish star, Marsai Martin took home the trophy for Innovator of The Year and was congratulated by her friend and Little costar, Issa Rae, via a video message.  Quality Control’s Kevin “Coach K” Lee and Pierre “P” Thomas; James Lopez of Will Packer Productions and Antoine Phillips, vice president, brand and culture engagement for GUCCI, were among the other honorees.

Culture Creators is an organization founded by Joi Brown that connects cultural pioneers with the new creators of culture via thought leadership, education, and ideation across passion points to ensure substantive influence and growth. The organization was also created to spotlight and amplify the contributions of individuals who have shaped the global view of Black culture by providing a platform that engages and celebrates their accomplishments. In addition to panel discussions, HBCU summits, networking sessions and workshops, Culture Creators has become the think-tank, talent incubator, and hub for innovators, creatives, and intellectuals who work to diversify various industries.