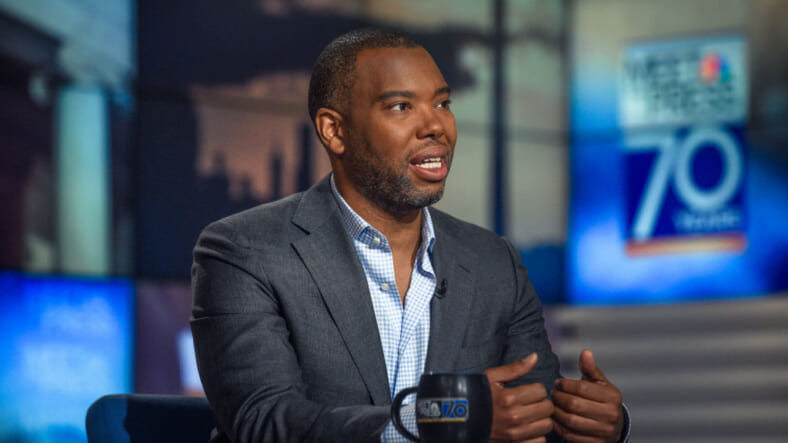 Ta-Nehisi Coates National Correspondent, The Atlantic; Author, ?We Were Eight Years in Power? appears on "Meet the Press" in Washington, D.C., Sunday, Oct. 1, 2017. (Photo by: William B. Plowman/NBC/NBC NewsWire via Getty Images)

Acclaimed writer, Ta-Nehisi Coates, will launch the national book tour for his first novel, The Water Dancer at the historic Apollo Theater in September.

As part of a three-year partnership between Coates, the Apollo’s inaugural Artist-In-Residence, and the theater, the National Book Award-winning author will discuss his latest work and will bring along a special guest, according to Broadway World. The initiative features events on the legendary Apollo stage and also new spaces in the Victoria Theater in fall 2020.

The Apollo partnered with Coates last year on the world premiere staging of his award-winning book, Between the World and Me, which was directed by the Apollo’s Executive Producer Kamilah Forbes.

“Coates is an artist changing the landscape of American culture. As a performing arts space squarely focused on commissioning and presenting work that centers on African-American voices, it was a natural fit for the Apollo to offer him a home for his work and ideas,” Forbes explained, according to Broadway World. “We look forward to announcing future events and programs very soon.”

Coates said he is also excited about the collaboration.

“I am looking forward to deepening my relationship with one of the most important cultural spaces deeply committed to African American arts and ideas,” Coates said.

In The Water Dancer, Coates tells the story of enslavement and how families were brutally ripped apart. The book tackles one of America’s deepest challenges – the ability to tell the truth, reported Broadway World.

The event will be held on Monday, Sept. 23 at 7 p.m. Tickets begin at $45 and include a copy of The Water Dancer. Tickets can be purchased at the Apollo Theater Box Office: (212) 531-5305, 253 West 125th Street, or by calling Ticketmaster at 1-800-745-3000 or purchasing online at www.ticketmaster.com. A limited amount of Half off for Harlem tickets will be available in person at the Box Office.

For more information, go to www.ApolloTheater.org.