Ronald Sullivan tells his side of the story in a 'Newsweek' cover story about his involvement as a lawyer with the Harvey Weinstein case and student anger about it, led to his firing 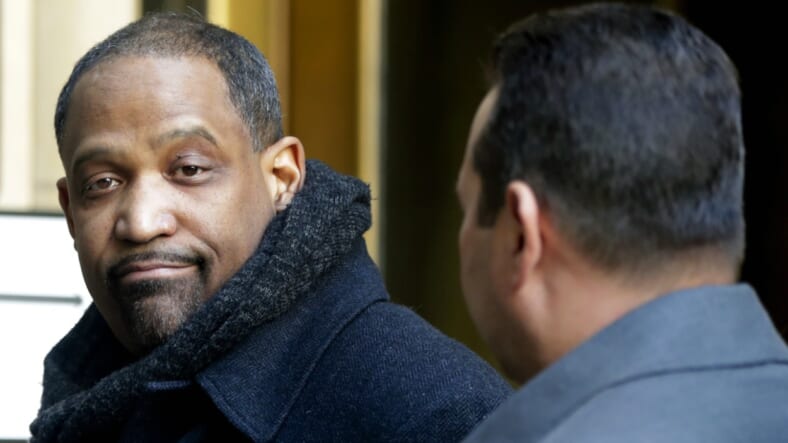 In a Jan. 25, 2019 file photo, attorney and Harvard faculty member Ronald Sullivan Jr. arrives at New York Supreme Court, in New York. Sullivan, who decided to represent Harvey Weinstein at his rape trial, is losing his position as head of a student house at the college. Harvard College Dean Rakesh Khurana said in a written statement Saturday, May 11, 2019 that he would not renew the appointments of Ronald Sullivan and his wife, Stephanie Robinson, the school’s first black faculty deans, citing concerns about the climate at Winthrop House, which he described as serious and numerous. Sullivan lives at the house and supervises students there. (AP Photo/Julio Cortez, File)

In June, Harvard’s first Black faculty dean was informed that the university would not renew his contracts with Winthrop House, one of the school’s 12 residential communities. Now he and his wife are speaking up about what led to that controversial decision.

During an exclusive interview with Newsweek, Ronald S. Sullivan, Jr., and his wife explain that they had both held their positions with the institution for a decade. When appointed, they were hailed for being the first African-Americans to be named faculty deans at the prestigious school, but by the end their tenure ended under a cloud of scandal.

The controversy surrounding him began, according to the magazine, when Sullivan, a professor at Harvard and head of its Criminal Justice Institute as well as a nationally known criminal defense attorney would be part of the team of lawyers representing film producer Harvey Weinstein.

After dozens of women started coming forward in October 2017, with accusations of sexual misconduct and rape at the hands of Weinstein, he quickly became the first clear target of the #MeToo movement.

When news broke that Sullivan would be helping Weinstein fight a five-count indictment in New York State Supreme Court in Manhattan alleging rape and predatory sexual abuse — students on Harvard’s campus erupted in protests. Many of them citing that they didn’t feel safe sharing space with someone who would take such an active role in defending the indefensible.

“A colleague at the law school emailed me and asked whether I’d have any moral objection to representing Harvey Weinstein. When I got the email I actually thought this was an ethics question—something she was posing to her class,” explains Sullivan. “I wrote back: Of course not. Every citizen has a right to a defense no matter how heinous the crime is or how unpopular the client. And then a few minutes later she wrote back and said, ‘He’d like to talk to you.'”

He explained that his intention was to be an academic helping students to be analytical about the circumstance.

“I certainly cannot dispute how some people feel,” he now concedes. “But I strongly believe that it’s … the job of the educator is to help students determine whether their feelings are rational… I would argue that a good educator would explore those feelings and help educate the student in a way where the student can exist in a diverse, heterogeneous environment.”

On May 13, just a few days after Sullivan was informed that his faculty dean contract would not be renewed, he withdrew from representing Weinstein.

“I represented [former New England Patriot] Aaron Hernandez in a double murder case. In which I won an acquittal,” he points out about his consistency in taking on sticking to his moral code as a lawyer. “He was an extraordinarily unpopular figure in Boston at that time. He had already been convicted of one murder when I represented him in the double murder.”

“Over ten years I’d say, at Winthrop house, a half a dozen,” he recalls of his track record taking on sexual misconduct cases. “And at the college, more widely, I represented, in Title IX proceedings [internal investigations conducted by the college] women who accused someone of sexual assault and men who’ve been accused of sexual assault.”

When the news about his involvement with the Weinstein case surface, acts of vandalism took place at Winthrop House, and a petition with more than 300 signatures demanding Sullivan’s removal. Editors of the Harvard Crimson, he said, led the protests but did not mention there was a counter-petition with 1,100 signatures on it. There was also a sit-in against him, and finally students who said publicly that they felt unsafe and finally refused to receive their diplomas from him.

READ MORE: Harvard case could represent the end of race in college admissions

Ultimately, it all led to further negative articles in the Crimson and Rakesh Khurana, the Dean of Harvard College responding in an adversarial way toward him. He says the dean was “cower[ing]” and “capitulating” to the “loudest voices in the room.”

Sullivan said that in an interview with the Crimson, Khurana had “mischaracterized” meetings that were held about the issue and that he had reminded Sullivan of his duties as a university faculty member which he says were a “demonstrable” lie. Finally Sullivan and his wife were informed that their contracts as faculty deans would not be renewed.

He says it is unclear if race was a factor in his dismissal, but he wants to weed out what he characterizes as unfair treatment by the university.

“…No master or faculty dean in the history of the institution has been treated as callously as I was. Whether it’s because of race, my height, my profession—I don’t know. And to be honest, I don’t care. I care about the result,” Sullivan explained. “And to the degree that I can do anything, I’m going to spend some time to ensure that the university behaves better in the future.”

Sullivan says that he has not thought about legal action and that his goal is an improved university.

“I’m hoping that what comes out of this is a better Harvard. I love Harvard. I’m a faculty member there. I’m an alum,” he explained. “And I’m a strong supporter of the students at Harvard for over a decade now. So I want to help make a better Harvard. A place where people dialog rather than engage in projects of demonization. A place where competing ideas can get sorted out in the marketplace of ideas. Rather than angry protests dictating policy.”