‘Pay them girls what they worth!’: Snoop Dogg demands equal pay for U.S. women’s soccer team after World Cup win

The U.S. Women's Soccer Team may be bringing home the World Cup, but only a fraction of the pay, but Snoop Dogg is calling it out as unfair 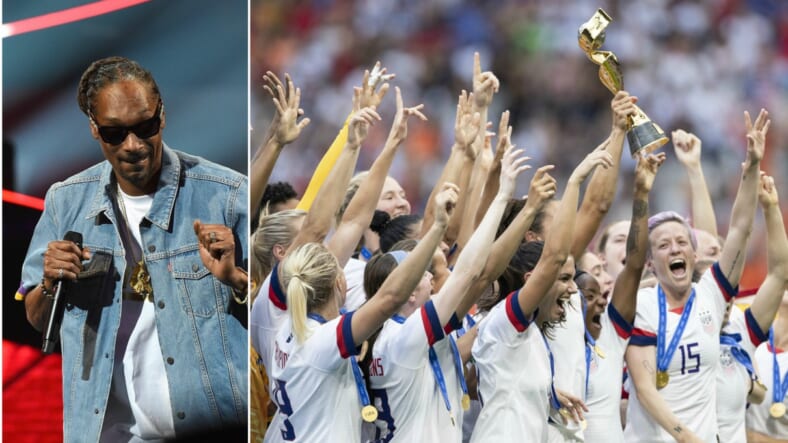 The U.S. women’s soccer team players are each returning from France with a fraction of what their male counterparts would have gotten if they had won in Russia last year and rapper Snoop Dogg has joined the voices calling for them to get equal pay.

This weekend Snoop led a rallying cry of fans and celebrities, who took to social media demanding equal pay for the team, which walked away with its second consecutive World Cup championship last weekend, their fourth in all.

Snoop is pointing out that the American women are being made to share the $4 million winner’s prize, as opposed to the $38 million that the French men split for winning the 2018 World Cup in Russia. They also came away with $250,000 in bonuses and between $110,000 and $120,000 each. France, on the other hand got paid an average of $1.6 million per player.

According to The New York Times, the breakdown for the U.S. women’s team is as follows: The ladies were paid for qualifying for the World Cup and also received bonuses for making the final roster. Then, each women’s player only receives between $110,000 and $120,000 for actually winning the tournament.

Which essentially means this year’s female champions only get approximately a tenth of what last year’s male champions received, for achieving the same impressive feat.

While the men’s World Cup generated a global audience of 3.5 million people, FIFA is reportedly projecting the 2019 women’s World Cup attracted over 1 billion viewers across all platforms, meaning women’s soccer is approaching the same level of fandom.

The team currently has a lawsuit pending against the U.S. Soccer Federation, accusing it of paying them less than the men’s team for ‘for substantially equal work,’ according to the Daily Mail. That litigation will reportedly go into mediation but it is unclear when that begins.