This time it's #visitingwhileblack. A Black man visiting a friend is harassed by a white man who is begged by his young son to stop his racial profiling, and it's all caught on video 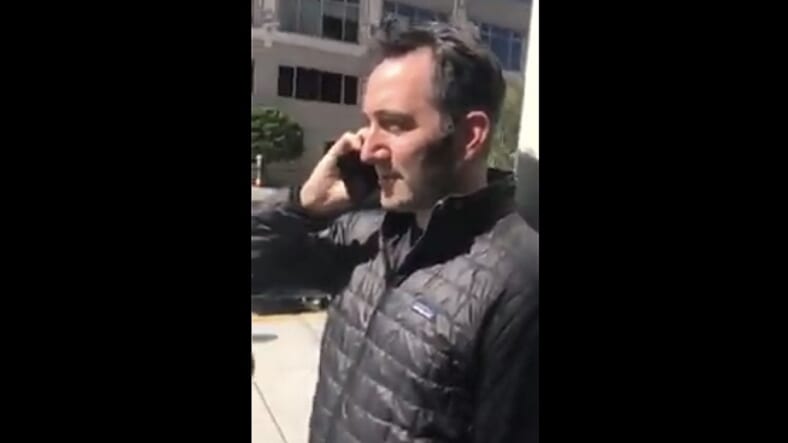 A man identified as Christopher Cukor, calls 911 on Wesly Michel on suspicion of tresspassing. (YouTube/Wesly Michel)

A witness captured video of a young boy begging his father not to overzealously call the police on a Black man, has gone viral over the holiday weekend.

According to the New York Daily News, on July 4, San Francisco software designer Wesly Michel, posted a video of a white man — now identified by Essence.com as Christopher Cukor — calling the police on him.

Cukor and his son were exiting the building just as Michel was entering it, when Cukor allegedly stopped to ask him why he was there. Michel responded that he was visiting a friend, but also pointed out that he didn’t need to answer to the stranger.

Undeterred, Cukor demanded Michel provide him with his friend’s name and then instructed him to call that person to the lobby to prove his claim. That’s when Michel says he started shooting video to document the incident.

In the clip, Cukor can be seen calling authorities while his child cries and pleads with him not to report Michel for trespassing.

Although Michel urged Cukor to listen to his son and even warned him that videos like the one he was taking tend to go viral, Cukor ignored them both as he gave a description to the dispatcher.

READ MORE: Black man says he was kicked out of hotel lobby for talking to his mom on cell phone

“He appears to be African American,” Cukor said into his phone.

“Appears to be African American,” Michel repeated incredulously, offering to instead give Cukor his information so authorities can properly identify him.

“I’m here to just rob, whatever, a mailbox,” Michel asked sarcastically, attempting to to make sense of what he’s even being accused of doing wrong.

“Can you hear him?” Cukor asked whoever was on the other line as Michel calmly protested being reported to police.

“Listen to your son, walk away,” Michel explains as Cukor’s young son continued crying. “I will stop the recording.”

As if on cue, at that exact moment Michel’s friend shows up to get in in the lobby. He can be heard saying, “Hi Cathy,” as he greets her, adding, “It took you so long to get here.”

“Daddy, look what you’ve gotten us into!” the boy scolds his father. “Let’s go!”

As he leaves with his friend, he reminds Cukor that he’s still recording.