[OPINON] The FBI surveilling Black activists when white supremacist groups are being emboldened is not only harmful, but takes the focus off of a very real threat, particularly these days 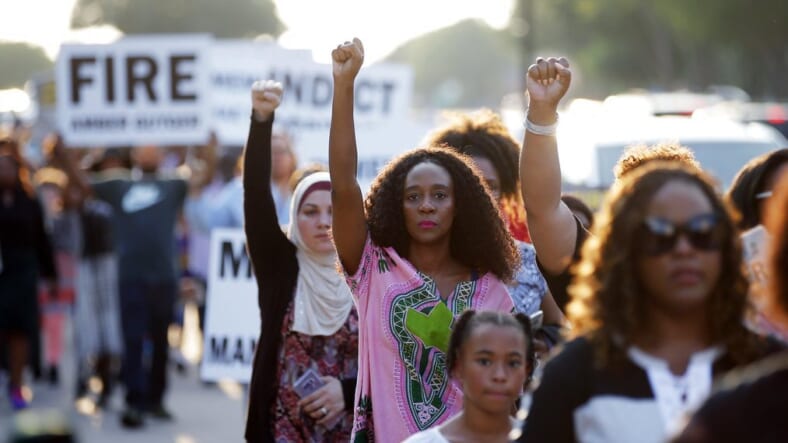 FILE - In this Sept. 16, 2018, file photo, demonstrators march around AT&T Stadium in Arlington, Texas, ahead of an NFL football game between the Dallas Cowboys and the New York Giants to protest the recent killings of two black men by police. Botham Jean and O'Shae Terry were fatally shot by police in North Texas earlier in the month. The video of Terry being shot to death by an Arlington, Texas, police officer on Sept. 1, 2018, seemed poised to go viral. But just hours after its release, attention quickly turned to the fatal police shooting of Jean in Dallas. (AP Photo/Brandon Wade, File)

This week, leaked FBI documents obtained by The Young Turks, revealed that “Black identity extremists” are now considered to be among the agency’s top counterterrorism priorities during this current administration.

The 2018-19 “Threat Guidance” documents describe Black identity extremists (BIEs) as those who “use force or violence in violation of criminal law in response to perceived racism and injustice in American society.”

The brief also cites that some BIEs acted in hopes of “establishing a separate black homeland or autonomous black social institutions, communities or governing organizations within the USA.”

One section even goes as far as to call the groups racist, explaining they are “likely to target civilian and government entities that are perceived as oppressors, including, but not limited to, law enforcement officers, the U.S. government, members of rival BSE [Black Supremacist Extremists] groups, and individuals based on race, ethnicity, sexual orientation and religion.”

In the very next breath, this woefully erroneous piece of FBI analysis then goes on to wrongly project that there would be “attrition” and decline in membership within white supremacist and nationalist extremist movements in years to come.

M’Scuse me?! Do the victims of the mass shootings know about this alleged decline win white supremacist attacks? Because the bullet holes and the lives that have been shattered as a result of this ongoing violence tells a very different story.

If I were sitting in a room with whoever was responsible for this brief, the first thing I’d ask is, “In what alternate universe are Black people the biggest threat to national security?”

Because in reality – where I live – unhinged white men emboldened by the president’s racist rhetoric are the ones who keep showing up to public places to shoot whoever catches their eye. While photos Black men with mental disabilities being dragged around by police with ropes around their necks, are going viral.

Despite evidence revealed by @FBI’s own database on #WhiteIdentityExtremism, which it reports is overwhelmingly responsible for terrorism-related deaths in the U.S., this administration has contorted the truth in favor of lies that put Black organizers and activists in danger. https://t.co/b2JxtimUpy

The willful ignorance of these documents, presented by one of the top agencies in our country no less, should be cause for alarm. And not just to Black people, or even activists, but to any decent human who can see what’s at play here. Because these files clearly weren’t just created for kicks and giggles, they also come with a game plan called “IRON FIST,” which maps out how the Bureau plans to infiltrate Black spaces to “mitigate” threats posed by Black extremist groups, and are also planning to exploit the felony status of some members.

READ MORE: FBI has a history of investigating the personal lives of powerful people

Now some of you may be thinking, “Well I’m not a Black extremist or a Black separatists so why does this affect me?”

In a perfect world where our government and members of law enforcement had a track record of thoughtfully assessing people based on their actions rather than optics, perhaps those of us who are law abiding could find some comfort in knowing these sorts of documents don’t refer to us.

But we don’t live in a perfect world, fam. Instead we now live in a country where children are being ripped from their parents and put in cages, while ICE is being so overzealous about grabbing anyone of color that they see, that even American citizens are accidentally getting deported.

When it comes to Black and brown bodies, the Trump administration has shown us time and again that it seeks to condemn first, and then (maybe – if it feels like it) check the facts later. We can’t rely on their discretion, integrity or follow through on just about anything. So anywhere you see “Black extremists” just assume they mean any Black person in general.

What makes all of this sad, this is nothing new. Back in the 60s and 70s the government was not only notorious for targeting Black liberation groups this way they were even rumored to be behind the assassination of some of our greatest leaders — even the peaceful ones who marched in Selma and had dreams of a day when we’d all finally be recognized as equals.

So what do we do now? At this space in time when we’re constantly getting reminders of just what “Make America Great Again” really means to President Trump and his legions of confederate flag waving fans?

First of all, we need to protect Black spaces at all costs, which means keeping in mind the old adage that, “not all skin folk are kinfolk.” Much like how slave masters used house slaves as spies and sidekicks back in the day, unfortunately, the MAGA sect has also been able to pull some Black conservatives so far right, they end up loathing the very communities they come from, and acting against their best interests.

A perfect example of this is Candace Owens, who despite probably being a very smart woman, seems to have a palpable disdain for Black people, gets visibly angry when discussing any pro-Black organizations, and once made comments about Adolf Hitler that were so extreme even white conservatives started complaining she’d gone too far.

While Owens may seem like a vocal minority, I assure you that there are many more where she came from and part of the FBI’s game plan in operation, “IRON FIST” is to weaponize people like her against us. Which means, the days of giving someone a pass just because they look like you and call you “sis” are quickly coming to an end.

Another key thing all this reminds us of, is the need to stay informed, particularly as we get closer to the next presidential election.

It used to be that you could say during a dinner party, “I’m just not that into politics” and no one would bat an eyelash. But these days, that stance is not only frowned upon but also pretty blatantly problematic. None of us can afford to remain willfully ignorant about what’s going on not just at the White House but also in our local politics as well.

One thing the GOP does extremely well is strategize from the ground up, and appeal to people in smaller communities, until their grassroots efforts (backed by billion dollar donors) have a sweeping effect over whole sections of the country. Now we’ve all essentially been put on notice that even the FBI has been made to draw a line in the sand and follow the example set by their president.

So while you’re staying informed, please also always check your sources. You never know if that Black liberation page you’re following on Facebook is made of concerned citizens, undercover agents or even a Russian hacker.

Which brings me to my last point. All the “fake news” quips we’ve heard from the president, all the internet hacker stories we’ve heard about these last few years, and now this incredibly short sighted FBI document all send home the same message: Trump has very successfully waged a war on perception. He has made it so people are confused about what is truth and what is fiction, and has muddied the water so much even once trusted sources are now being coerced into creating propaganda to fortify his agenda.

Not to be an alarmist but this is quite literally what the Nazi party did during the height of their rein. Because they knew that he who controls the narrative, controls the minds of everyone who hears it. Now more than ever, we need to tell our stories and our truths even louder than before.