"I think it's really disgusting how Black women have been treated in comedy over the years," says the show's trailblazing creator. 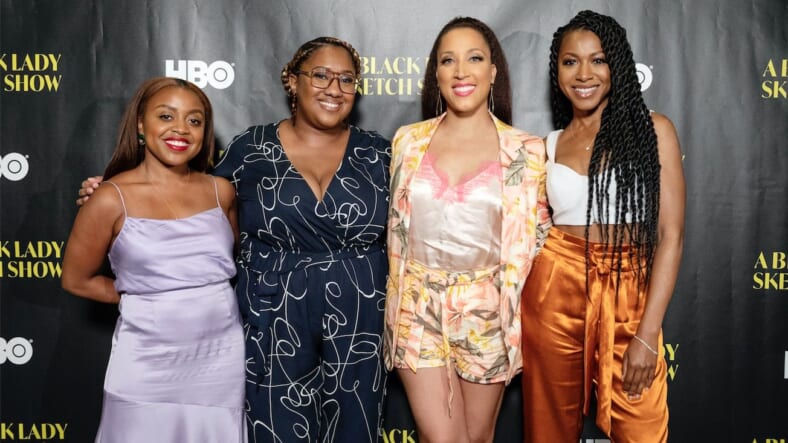 The creator, executive producer, show runner, and star of the series that features an all-star cast of hilarious performers including Gabrielle Dennis, Quinta Brunson, and Ashley Nicole Black sat down with theGrio to discuss her intentions for the show.

Aside from recruiting tons of A-list celebrity guest stars (Angela Bassett, Laverne Cox, Yvonne Orji) for the series co-executive produced by Issa Rae, Robin Thede has provided tons of reasons to tune in. Not only is the show hilarious and thought-provoking, it also represents Black women in ways we haven’t seen before.

“I try to really focus on creating work that will make people feel seen and feel important and feel joyful even when we’re doing sketches that are thrillers or horror parodies on A Black Lady Sketch Show, I think there’s always those moments where you’re going to see something and go, ‘She did that for me,’ and that’s what makes me happy,” she says.

Thede’s comedy often centers on social issues and sometimes those jokes aren’t incredibly obvious. The social commentary she offers up makes her work that much more important, but may leave some folks feeling a bit left out of the joke when they don’t grasp the deeper meaning right off the bat.

“I will say that even if something goes over someone’s head it’s not because they’re dumb and it’s not because they’re not educated enough to understand the joke. It’s just because I’ve brought them into a realm where we’re not normally seen…I’m not trying to write things that are over people’s heads or confuse people but I do think in comedy you have to be more subversive these days in order to not feel like you’re doing something that’s been done before.”

7 reasons why Robin Thede is our new shero

Representation in the comedy world has been an uphill battle for Black women in the industry and A Black Lady Sketch Show does a lot to move that needle in the right direction.

“I think what’s happening with black women comedy especially right now is so important…It was critical for me in casting this show that we showed size diversity, age diversity, and so many shades of Black women because those doors haven’t traditionally been open,” says Thede.

“I think sometimes in comedy women who are bigger or older or whatever very much get typecast as this kind of like loud, eye-rolling stereotype…I think I’ve always just kind of forged my own path…I definitely have considered what Black women look like as a whole in this industry and I know that for especially darker-skinned women and larger women and older women who who are also Black in this industry, there has absolutely been discrimination and sexism and racism that have kept them from being as great as some of their counterparts,” she continues.  “I think it’s really disgusting how Black women have been treated in comedy over the years.”