The powerful new series premieres August 14 on OWN. 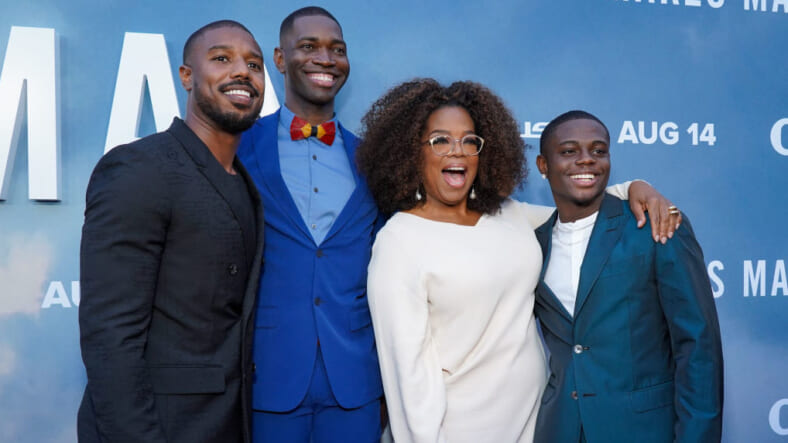 David Makes Man has been on our radar ever since theGrio had the pleasure of visiting the show’s set several months ago. In January, we watched as the show’s executive producer, Michael B. Jordan discussed the series alongside its stars, (Phylicia Rashad, Alana Arenas, and Akili McDowell and showrunner Dee Harris- Lawrence and shared snippets of the beautifully authentic series.

Just last week, theGrio sat down with Oprah Winfrey and the show’s creator, Tarell Alvin McCraney, and a handful of journalists to find out how this groundbreaking show came to be.

“From the very first time I heard the pitch, I sat in the room, I closed my eyes and I was doing everything I could not to cry during the pitch because it’s kind of unprofessional,” Oprah admitted.

“I knew if he was able to do a portion of what the pitch represented, that we would have something that would be, in its own way, a phenomenon.”

That may be the perfect word to describe what David Makes Man stands to be when it premieres on OWN this week. Visually, it’s as stunning as McCraney’s Oscar-winning film, Moonlight, and conceptually, it has never been done before.

“First of all, most of the stories I read growing up were always about Black girl stories…So, sitting in the room with Tarell was the first time I thought, ‘Wow. I really don’t know much about Black boys, nor have I ever actually thought very much about Black boys.’ I don’t spend a lot of time thinking about Black boys so I thought the series and the way he pitched it would offer the rest of the world an opportunity to see inside a world that we rarely get to see,” Oprah explained.

From the very beginning of the first episode, McCraney invites viewers inside the heart and mind of one Black boy, David, or D.J., or Dae, depending on who’s around. The title character is flawlessly portrayed by Akili McDowell.

“It’s really about finally being able to see myself and get that validation of self and seeing characters, reading characters–I read Tar Baby and I know Tar Baby is the one that no one likes to talk about, but when I read Tar Baby it was one of the moments where I was like, ‘I know this southern boy. Oooh, I know him so bad. I know wanting after a person so wonderfully.’ And then to sort of turn around and see Florida life in a way that I hadn’t seen since Zora Neale Hurston, I thought to myself, ‘Well, that’s what I’ll do. I’ll reach into my pocket, my corner of the world, and show it as best I can,'” McCraney said.

“And so I’m grateful for that legacy. I’m terrified of it,” he continued. “You want to be noble you want to stand up in front of it. But you also know, in order to truly do it, you have to bare yourself, flaws and all. There’s no way to really be a part of that legacy or add to it unless you show your full self. That means the warts and all. And that’s the terrifying part of it.”

It’s hard to believe there could be anything terrifying about unveiling this masterful project to the world. It’s beautifully shot, expertly cast, and magnificently written, inviting viewers into a world so many will identify with. The show is rooted in highlighting the intentional and unintentional ways Black folks “adjust” or code-switch to navigate their every day lives. It also examines trauma, and its effects, in a way we have never seen; forcing us to confront so many of our own demons through the fascinating and complex characters McCraney has created.
“I didn’t use the word ‘trauma’ in the pitch. I view it as turning points, moments of awareness. What are the moments where you are made most aware?”
“One of the things that as really necessary for me in telling the story was talking about how David, as a child, how we, metabolize these moments,” he said.
Oprah knows how to spot something special, and this show may be her most valuable find yet.
David Makes Man premieres August 14 on OWN.