The soul-stirring show premieres August 14 on OWN. 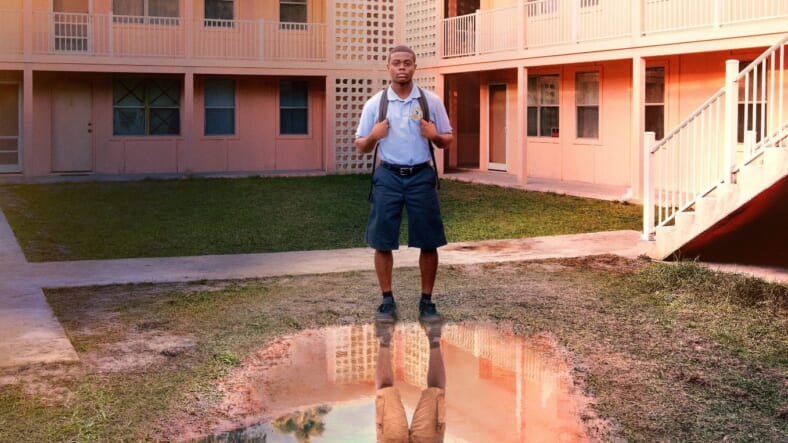 From the brilliant mind of Tarell Alvin McCraney, the Oscar-winning co-writer of Moonlight, comes a new OWN series called David Makes Man.

The drama stars 16-year-old Akili McDowell in the title role as a teen growing up in a low-income Miami housing development. Raised by a single mom in a community with sparse financial means, David attends a prestigious school for gifted students, but he feels like he is living two different lives and the stress takes its toll.

TheGrio was invited for a set visit in Orlando, Florida this past winter to view the making of a particularly emotional scene featuring Alana Arenas, who plays David’s mother and Travis Coles, whose character is a neighbor in the close-knit building. Also on set that day was Tony Award winner Phylicia Rashad who plays David’s teacher.

Although the show had to be filmed in Orlando instead of Miami because of budget and time constraints, that didn’t stop the show creators from bringing as much authenticity as possible. McCraney was meticulous in his handling of this project, down to the look and feel of David’s home. The building, located on the spacious campus of Dr. Phillips High School,  was constructed to look like Homestead Village where McCraney grew up as a kid.

“Being able to build this, which is a pure replica of where Tarell grew up, was a joy. I went to MIami with him to see it and the fact that they were able to build this and Dr. Phillips allowed us to do this, is pretty amazing,” said showrunner Denitria Harris Lawrence.


“The scripts kept telling stories that were intricate to the building itself. There are scenes that happen right on this transformer,” said McCraney who marveled at how spot on the recreation of his childhood home was. “I get vertigo when I go on the set, so I stay out of there a lot.  I have feelings of excitement that I’m there again and also sadness that it’s not the thing.”

Even McCraney’s siblings were taken aback by the accuracy of the replica.

“My mom passed away when I was 22. We try to commenterate her birthday every year, which is right after Halloween. She loved horror, so she read It and Pet Sematary to us at bedtime when were kids. We’re big horror fans, all of us,” McCraney shared. “She really loved haunted houses so we went to Halloween Horror Night at Universal for her birthday and I’m like ‘You guys want to go see the set?’ and they saw it from a distance and they were like ‘No.’”

Beyond just the set, the characters themselves also embody bits of McCraney.

“As my brother likes to say, all the characters are me in some way. Their life blood is my life blood. I have to give of myself for them to be alive and then the actors bring so much. So, it’s a conversation and combination between us about how they come to life. The experiences are based off of my experiences,” explained McCraney.

Being on the set of David Makes Man almost felt like peeking in on a family reunion with plenty of smiles and plates to go around. The mutual love and respect in the air was palpable even after some scenes had to be shot eight or nine times. An abundance of patience, respect, and talent kept the work flow humming.


McCraney gushed about Akili McDowell who plays the lead, David.

“Akili, I love that kid. I love him, I really do. He’s an athlete and he’s eager to learn and practice and get better. Every take, he just gets better. He digs in. He’s luminous. He finds a way to engage the work. He’s learned so much in the small period of time we’ve had him. He’s eager to learn more. He’s a gift,” said McCraney with a bright smile.  “I can’t get over how talented and generous our young people are. They’re really interested, curious, smart, and sweet. Not a temper tantrum amongst them.”

McDowell, a Houston native who peppers his statements with “sir”and ma’am,” talked about what it was like to take on McCraney’s story. At just 16 years old, McDowell displays a level of professionalism and focus that goes far beyond his biological age.

“It’s amazing being able to tell his story through my acting and just the experience of it all. All the ups and downs, trials and tribulations, the highs and lows, I feel like I can really express myself with this opportunity. I feel blessed. I’m just happy to be here,” said the dimpled 16-year-old with a twinkle in his eye.

Though McDowell hasn’t suffered the exact same traumas that haunt David, he does feel a certain kinship to David and McCraney.

“I also grew up in a single parent household and my mother, she works two jobs. She does the best she can and she does a great job. She’s raised me and I’m very thankful,” McDowell said.

Because the protagonist of David Makes Man is a teen, there are a number of child actors on the set, but there are also veterans like Phylicia Rashad.


“Phylicia has this saying that is basically about how the vessel can hold the work, but not interrupt it. She has a way to engage the work in a way that is infinitely about the story we’re telling and not anything else,” said McCraney who previously worked with Rashad on his play Head of Passes a few years back. (McCraney has since written the Broadway musical Choir Boy, which won a 2019 Tony Award for Best Sound Design.)

Rashad explained the reasons that she signed on to David Makes Man.

“I came on because Tarell Alvin McCraney is writing, because Michael B. Jordan is producing it, and because it’s on OWN Network. This has been the best. It’s been wonderful. I marvel that there is such a company of so many people and everyone is so great. Great artists and great people,” said Rashad, who plays David’s teacher Dr. Woods-Trap.

The Bigger Picture
Everyone on set praised Oprah, the OWN team and having the ability to tell such an unapologetically Black story with authenticity and creativity. McCraney, who is hands on with his projects, but also describes himself as “notoriously shy,” relishes the opportunity to sit back and watch his experienced and talented colleagues take the work to even higher heights.

Showrunner Denitria Harris-Lawrence also talked about the importance of having Black women showrunners making power moves in Hollywood. “Thank goodness there are actually a lot more Black women showrunners. Shonda Rhimes is of course always a name that is leading the charge, but I have a few friends who are also show runners,” explained Harris-Lawrence. “There are folks like Elle Johnson who will be doing Madam CJ Walker for Netflix, Samantha Corbin Miller (Law and Order: SVU), Janine Sherman Barios (Claws), and you have Lena Waithe heading up The Chi.  So there are a few of us and we’ve kind of gotten our groove all at the same time. It’s been kind of like a celebration of that. We’ve all been in business for a long time. I’m  heading into my 23rd year.

Actress Alana Arenas, who is riveting as David’s mother, pondered on the overall impact of David Makes Man as it relates to portraying the Black community, particularly Black men.

“There are so many young, Black men with potential that has been either untapped or diminished because of the world’s issues. Sometimes the general public reads certain people a certain way. This story helps give greater understanding to some things in a very beautiful, enlightening way and offers a greater appreciation for how people have to navigate the world,” surmized Arenas, a Miami native.

McCraney explained the heart of David Makes Man like this: “The core of the thing is that young Black people are often asked to make adult decisions about their lives pretty early and they gain tools and ideas and mechanisms and ways of survival. But how does those survival tools shape us as adults? How do they make it into adulthood? Are they necessary? Do we need them still? Are some of those things harmful?”

David Makes Man debuts on OWN at 10 pm EST on August 14th.