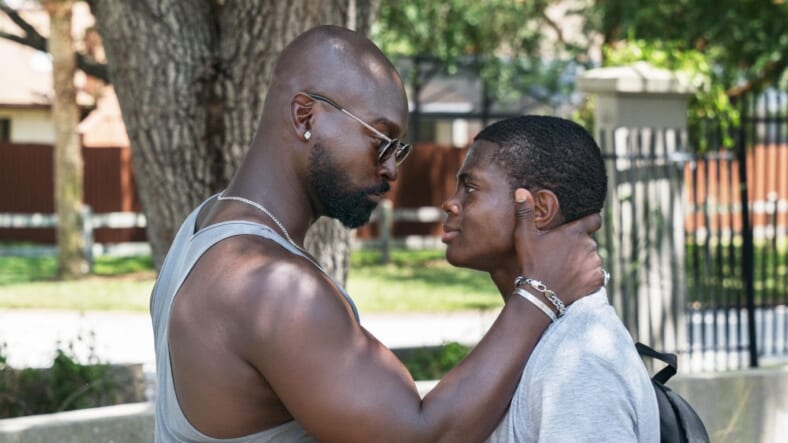 The premiere episode of David Makes Man on OWN is visually stunning and is further buoyed by the lyrical writing delivered with emotional grace by the stellar cast.

The show, created by Oscar winner Tarell Alvin McCraney and executive produced by Oprah Winfrey and Michael B. Jordan, centers on David (Akili McDowell). David’s life as an eighth grader at a well-resourced magnet school for gifted children in Miami is in stark contrast to his life at home in a low-income housing development where he stays his mother Gloria (Alana Arenas) and his nine-year-old brother JG (Cayden K. Williams).

READ MORE: Oprah Winfrey reveals why she was moved to tears by Tarell Alvin McCraney’s pitch

The first episode shows David’s cumbersome daily routine of getting up before sunrise to change the sheets for JG who wets the bed, dress himself (all while trying to not wake his mom who sleeps on the couch), walk his little brother to school, and then literally sprint back towards home to catch the bus to his own school.

All of this is on top of trying to navigate himself and JG around the drugs and violence that permeate their housing complex.

Seeing that tiny sliver of David’s life highlights the tremendous pressure some young Black youth are put under everyday. David is expected to be engaged and excel just like his counterparts at school who start their day with pancakes, an air-conditioned car ride to school, and a kiss good-bye from their parents.

Meanwhile David has a more complex home life trying to help his mother who is a recovering drug addict, works double shifts at a diner and still finds it difficult to keep the lights on and feed two growing boys on her own.

David’s two bright spots at school are his tough-love teacher Dr. Woods-Trap (Phylicia Rashad) and his best friend Seren (Nathaniel Logan McIntyre), who is bi-racial and lives in a two-parent home in a nice neighborhood.

Episode 1 shows friction between David and Seren that explodes into physical violence over hurt feelings and a heavy secret. Throughout the episode, which follows David not only physically, but also in his thoughts and dreams, the audience is immersed in surreal imagery that seems to both amplify and provide hints about the narrative arc.

A man named Sky (Isiah Johnson) takes particular interest in David, offering advice on everything from life at home to school work. By the end of the episode, Sky’s relationship to David is revealed and it leaves more questions than answers.

Akili McDowell does a phenomenal job in the lead role (each cast member is spot on) and the muscular storytelling coupled with the captivating visuals, means that David Makes Man is must-see TV.