The Pledge of Allegiance is something common for American students to recite each morning, but one teacher in Florida went as far as questioning the "maturity" of students who didn't stand for it 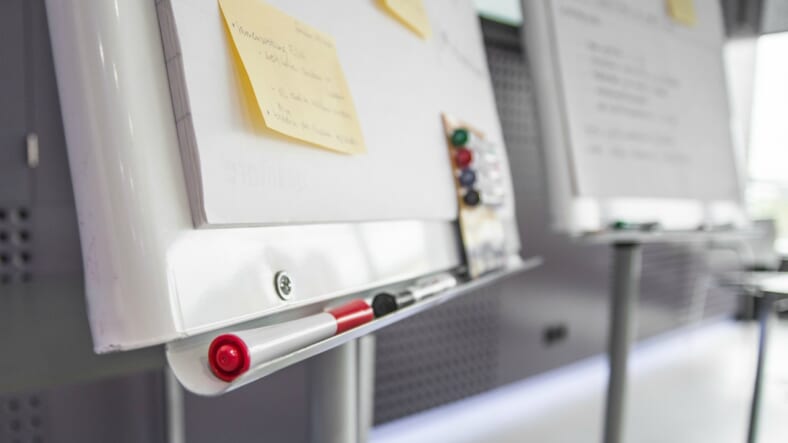 A Jacksonville, Fla., teacher has was removed from First Coast High school, after leaving a message on his classroom whiteboard scolding students who opted out of standing for the Pledge of Allegiance.

An image of the message, addressed to “homeroom,” went viral during the first week of the students’ return to school, the Florida Times-Union reported.

“THINK: We had about a half million Americans die in our Civil War, which was largely to get rid of slavery,” reads the message from teacher Daniel Adam Goodman. “There are no longer separate water fountains and bathrooms in Jacksonville for “white” and “colored,” as Mr. Goodman remembers from the 1960’s. We had an amendment to the U.S. Constitution allowing women the right to vote.”

It goes on to name Black administrators of First Coast High School, and invokes former president Barack Obama while ad the same time admonishing students who didn’t stand for the Pledge.

“MY POINT? You are all extremely lucky to be living in the U.S.A.,” Goodman wrote. “If you refuse to stand during the Pledge of Allegiance or our National Anthem, are you revealing your maturity and wisdom? Actually, you are displaying the opposite (as some pampered arrogant celebrities and athletes tend to do) — Mr. G.”

A photo of the whiteboard went viral after it was posted to social media and shared repeatedly.

However, Florida state law actually permits students to be excused from having to recite the Pledge of Allegiance and standing, so long as the student’s parent or legal guardian files a written request with the school principal.

A spokesperson for the Duval County Public Schools got wind of the message on Wednesday, and released a statement.

Justin Fluent, the Principal of First Coast High, also sent a message to the parents and students of the school.

“I believe classrooms provide the perfect place to have insightful and thought-provoking discussions about patriotic expressions and civil liberty. However, this must be done in a productive and respectful way, and in accordance with law and school board policy.”

As it stands, Goodman has been removed from the classroom upon further investigation of the matter by the Office of Professional Standards.