In a long overdue recognition, the tennis champion who held titles two generations ago, was honored with a statue 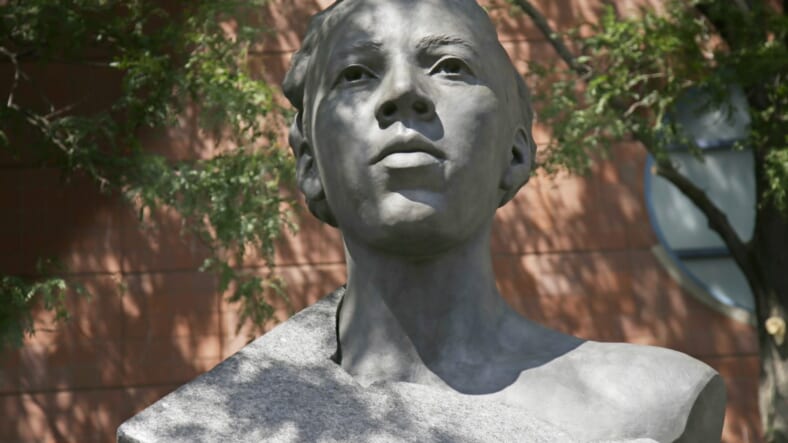 A statue of Althea Gibson sits in front of Arthur Ashe Stadium at the Billie Jean King National Tennis Center during the first round of the US Open tennis tournament Monday, Aug. 26, 2019, in New York. (AP Photo/Frank Franklin II)

Trailblazing tennis legend, Althea Gibson is finally being recognized for her contributions to American sports.

An 18-ton statue of Gibson was unveiled in New York on Monday at the opening day of the U.S. Open outside of the Arthur Ashe Stadium at the Billy Jean King National Tennis Center, according to NPR.

READ MORE: Late tennis great Arthur Ashe finally gets his due in hometown of Richmond, Va.

Receiving a recognition that is long overdue, Gibson was “the first African American to break international tennis’ color barrier,” deemed the top-rank woman in the sport, and won many other accolades in the sport during the 1940s and 50s, including becoming a two-time U.S. national champion.

“Recognizing for me as an African American woman and recognizing what Althea stood for and understanding that she truly broke the color barrier for tennis — a lot of people think it’s Arthur [Ashe], but it was Althea 11 years before him,” said former president and CEO of the U.S. Tennis Association,  Katrina Adams, according to an article by The Undefeated.

Adams along with tennis legend, Billie Jean King, both advocated for the statue of Gibson. King considered her as the “Jackie Robinson of tennis,” according to the site.

Former tennis player, Angela Buxton from Britain, who played with Gibson in 1956 and won the French and Wimbledon doubles championships said it’s “It’s about bloody time,” the Associated Press reports.

READ MORE: Tennis star Naomi Osaka opens up about why she ‘has to be the best’

Buxton knew all the struggles the tennis legend had to endure to break barriers in the sport as a Black woman, especially since it was “dominated” by white players.

“Althea, with her two ticker-tape parades, still wasn’t allowed into a hotel where the whites sleep or a water fountain to drink where whites drink, but she helped to break that down,” Buxton stated.

A quote by Gibson in engraved in the statute states, “I hope that I have accomplished just one thing: that I have been a credit to tennis and my country.”