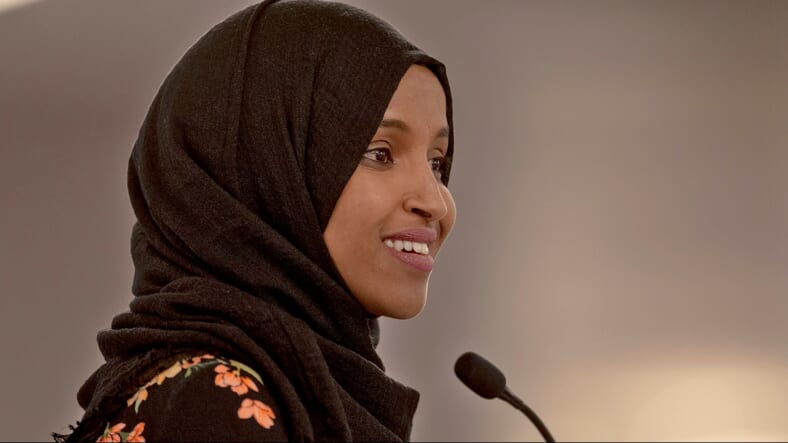 A Washington D.C. woman is accusing Rep. Ilhan Omar of an affair with her husband that led to the end of their marriage.

According to The New York Post, in a divorce filing submitted in DC Superior Court on Tuesday, Dr. Beth Mynett claims that in April her husband Tim Mynett, confessed to having a secret relationship with the Somali-born congresswoman.

“The parties physically separated on or about April 7, 2019, when Defendant told Plaintiff that he was romantically involved with and in love with another woman, Ilhan Omar,” read the court papers.

The 55-year-old physician then goes on to explain how her 38-year-old spouse made a “shocking declaration of love” for the Minnesota democrat before leaving her.

“Defendant met Rep. Omar while working for her,’’ the document states. “Although devastated by the betrayal and deceit that preceded his abrupt declaration, Plaintiff told Defendant that she loved him, and was willing to fight for the marriage.”

“Defendant, however, told her that was not an option for him’’ and moved out the next day, the papers go on to say. “It is clear to Plaintiff that her marriage to Defendant is over and that there is no hope of reconciliation.’’

The Post reports that since 2018 Omar has paid Mynett, 38, and his E. Street Group $230,000 through her campaign for fundraising consulting, digital communications, internet advertising and travel expenses.

Beth Mynett also claims her estranged husband and Rep. Omar, “took the parties’ son to dinner to formally meet for the first time at the family’s favorite neighborhood restaurant while Plaintiff was out of town.”

She is now seeking primary physical custody of the couple’s son due to her husband’s “extensive travel” with Omar, alleging, “Defendant’s more recent travel and long work hours now appear to be more related to his affair with Rep. Omar than with his actual work commitments.”

Despite the allegations, the congresswoman is married to Ahmed Hirsi, a senior policy aide for Minneapolis City Council member Alondra Cano. They have been married since 2009.