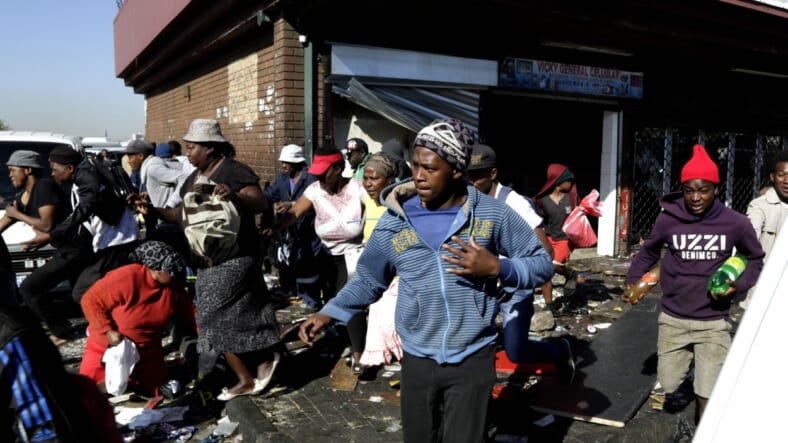 Looters make off with goods from a store in Germiston, east of Johannesburg, South Africa, Tuesday, Sept. 3, 2019. Police had earlier fired rubber bullets as they struggled to stop looters who targeted businesses as unrest broke out in several spots in and around the city. (AP Photo/Themba Hadebe)

Deadly civil unrest has hit South Africa as the nation, once dealing with ending the racist system of apartheid, is now grappling with the problem of immigration and xenophobic attacks of its citizens against foreign nationals from other parts of the continent.

According to reports, five people have been killed and at least 189 arrested in the latest outbreak of violence against people from nations including Nigeria, Somalia, Kenya and other African countries who live in Johannesburg.

South Africa’s largest city has been plagued by violence on foreigners, which President Cyril Ramaphosa has called “totally unacceptable” and adding that xenophobia was “something that is completely against the ethos that we as South Africans espouse.”

Ramaphosa has warned that the riots could prompt counterattacks against South Africans in other nations, The New York Times reports.

Rioters in Monday night’s violence appeared to target shops owned by foreigners, said the mayor of Johannesburg, Herman Mashaba, and the vandalism follows a pattern of similar attacks on immigrants this year.

Abushe Dastaa, an Ethiopian shop owner, invited TV reporters into his shop to view his bare shelves and an empty fridge and detailed how his business had been emptied and vandalized overnight.

“Even now we are scared to come this side,” he said.

The most recent surge in violence began on Sunday, and while there is anger both in and outside of South Africa, many have attempted to downplay the intolerance of perceived outsiders. Police minister Bheki Cele is one such naysayer, calling the violence the result of “criminality rather than xenophobia.”

“We can’t rule out pure criminality, of criminals using a sensitive situation where there are real grievances on issues of unemployment and foreign nationals,” Cele told reporters.

Nigeria’s foreign affairs minister, Geoffrey Onyeama, wrote on Twitter Monday that he  received the “sickening and depressing news of continued burning and looting of Nigerian shops” in South Africa, and he blamed “mindless criminals” for the violence. He also called out the police for failing to provide adequate protection.

David Makhura, the premier of Gauteng, noted during an inspection of the damage in Alexandra that there was a “xenophobic sentiment” underlying the attacks.

Nigeria’s President Buhari said on Tuesday he was sending a special envoy to meet with President Ramaphosa to secure the “safety of (Nigerian citizens’) lives and property,” the report states.