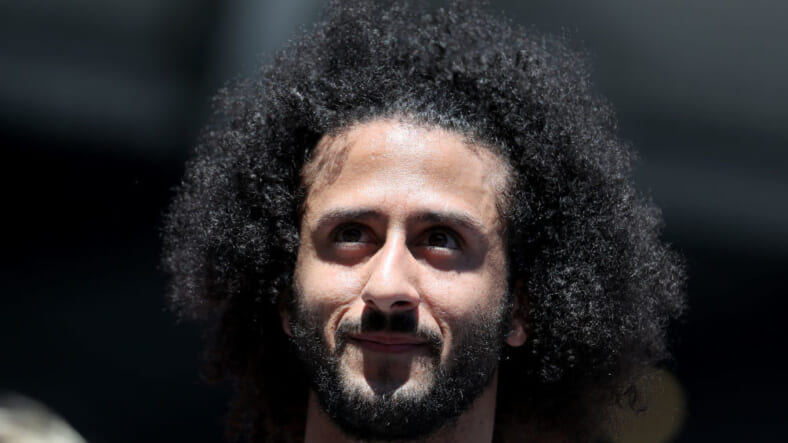 Former San Francisco 49er Colin Kaepernick watches a Women's Singles second round match between Naomi Osaka of Japan and Magda Linette of Poland at the US Open. (Photo by Al Bello/Getty Images)

Clearly that’s the case evidenced by Colin Kaepernick who linked up with Cleveland Browns star Odell Beckham Jr. for a workout training session to keep him on his toes and in optimum condition just in case an NFL offer comes his way.

Kaepernick, a former quarterback for the San Francisco 49ers, recently posted a video of the workout session with Beckham, even though it happened back in July, according to TMZ.

Kap’s been sitting out for the last three years after getting blackballed by the league for kneeling on the field to protest racist injustice.

But after settling a deal with the league for collusion, he wants back in, and he’s reportedly been training at least six times a week to keep it right and tight.

From putting in work predraft, to staying ready against the odds! Love to my Brother @obj – #StillReady ?: @relrelrelrel @djtonedef @garyngusc

The athlete turned activist was seen back in July working out with Beckham at UCLA’s practice field – and we all know from ESPN’s past Body Issue, that’s Beckham’s in very good shape.

“From putting in work predraft, to staying ready against the odds!” Kaepernick wrote on Instagram. “Love to my Brother @obj.”

Last month, Kaepernick took to social media to mark the three-year-anniversary of the day he took a stand and kneeled in his first pre-game protest of racial injustice and police brutality.

The protest by the former San Francisco 49ers QB, which began August 14, 2016 when he took a knee during a preseason game against the Houston Texans, was designed to highlight the social injustices experienced by African Americans around the country at the hands of police.

Kaepernick dropped a moving video with montages of 12-year-old Tamir Rice who was killed by a trigger-happy Ohio cop within seconds of approaching him in a park as well as other police shootings from around the country.

He also reminded the masses at the time he had been “Denied work for 889 days” which flashed across the screen of his video.