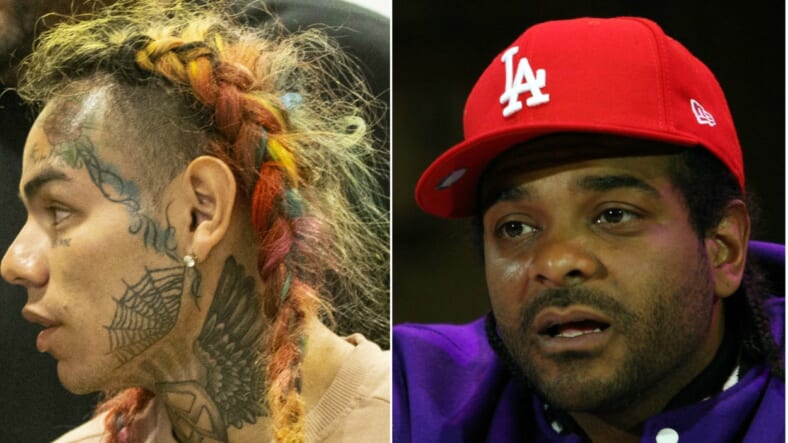 Tekashi 6ix9ine shocked both the courtroom and hip-hop fans when he testified against fellow gang members Thursday afternoon and identified hip hop star Jim Jones as part of the Nine Trey Gangsta Bloods.

According to his testimony, federal prosecutors questioned the “GUMMO” rapper, whose real name is Daniel Hernandez, about Jones, and when they got specific about his gang activity, Tekashi testified that the “retired rapper” is also a member of the Nine Trey Bloods, according to XXLMag.

The prosecution played a phone call between Jones and alleged Nine Trey godfather Jamel “Mel Murda” Jones, during which Jones is heard saying about 6ix9ine: “He not a gang member no more” and “They going to have to violate shorty because shorty is on some bullsh*t.”

Jones and 6ix9ine have reportedly been spotted in the past at several events together. But when the Love and Hip Hop star later referred to the embattled rapper as a “rat” and “unmentionable.”

“Screw him,” Jones said in an interview with The Cruz Show on Real 92.3 in Los Angeles. “He did some actions that he can’t come back from, so his name non-mentionable. If you a rat, then you’re a rat forever. That’s a subject we don’t even have to touch on.”

In November, 6ix9ine and members of the Nine Trey gang were hit with federal racketeering and firearms charges. The rainbow-haired artist immediately cut a deal with prosecutors. In exchange for testifying against his former associates, prosecutors agreed to ask the judge to reduce his sentence.

As part of his cooperation with the feds, 6ix9ine is expected to receive leniency at his sentencing in January 2020. His crimes typically draw a mandatory minimum of 27 years in prison. The rapper admitted to selling a kilo of heroin and offering payment to shoot a rival gang member.

On Sept. 19, 6ix9ine took the stand for day three of his testimony against former Nine Trey associates Anthony “Harv” Ellison and Aljermiah “Nuke” Mack‘. His hours-long tea spilling has detailed the inner workings of the gang and the hip-hop industry. According to The New York Times, he has also outlined Nine Trey’s leadership and translated slang for the courtroom.