Tekashi 6ix9ine’s ex claims his plea endangers her, their daughter

When faced with spending the rest of his life in prison, the rapper made a complete turnaround and is dropping dimes on everyone 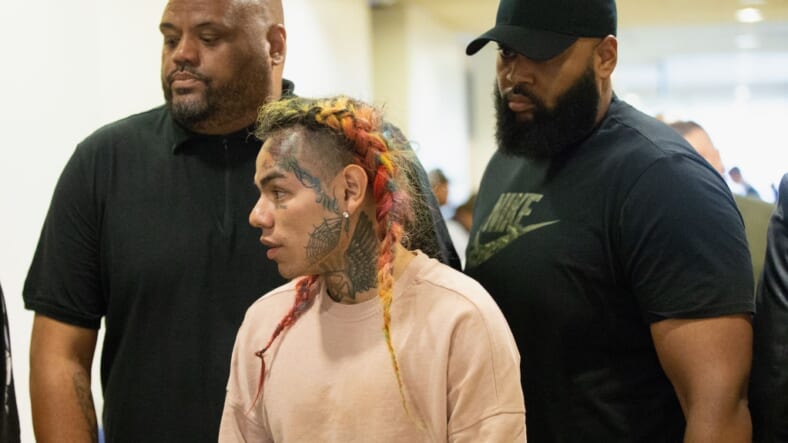 Rapper Tekashi 6ix9ine, real name Daniel Hernandez has accepted a plea deal and agreed to serve as a government witness to avoid spending the rest of his life in federal prison.(Photo by Bob Levey/Getty Images)

The ex-girlfriend of troubled rapper Tekashi 6ix9ine says that his decision to cooperate with federal authorities about the Nine Trey gang threatens the safety of her and the her and the couple’s 3-year-old daughter.

Shortly after learning that Tekashi 6ix9ine, whose real name is Daniel Hernandez, had pleaded guilty last Saturday to racketeering, conspiracy, firearms offenses, narcotics trafficking and more, Sara Molina told TMZ that he’s left her and their daughter to deal with the aftermath.

“He did what he did – he made his bed and now he has to lie in it,” Molina told TMZ. “But he didn’t think of how it’s going to affect others. I’m left to pick up the pieces of whatever mess he’s made, which is and has always been a thing.”

Tekashi 6ix9ine, who remained behind bars on Saturday, is expected to receive leniency at his sentencing in January 2020. His crimes typically draw a mandatory minimum of 27 years in prison. The rapper admitted to selling a kilo of heroin and offering payment to shoot a rival gang member.

Molina told TMZ that after everything that happens, she does not foresee Tekashi69x9ine having any sort of relationship with their daughter, Saraiyah, at least in the immediate future.

“Until I feel like he’s in a space in life and in a solid situation, I can’t feel comfortable allowing him to bring whatever he has with him into my daughter’s life,” Molina said. “My job is to protect my daughter at all costs, even if that means him.”

READ MORE: Cardi B confirms that she’s ‘working things out’ with Offset

Tekashi 6ix9ine’s bad boy image has taken a complete turnaround with his decision to cooperate.

The rapper was arrested in November and placed in a federal prison in Brooklyn, but after facing death threats, he was moved to an undisclosed facility, WABC reported.

Tekashi 6ix9ine asked to be moved away from Crips and Bloods and is in a facility known for housing cooperating witnesses, TMZ has reported.

Molina told TMZ that the events in her ex-boyfriend’s life are unfortunate.