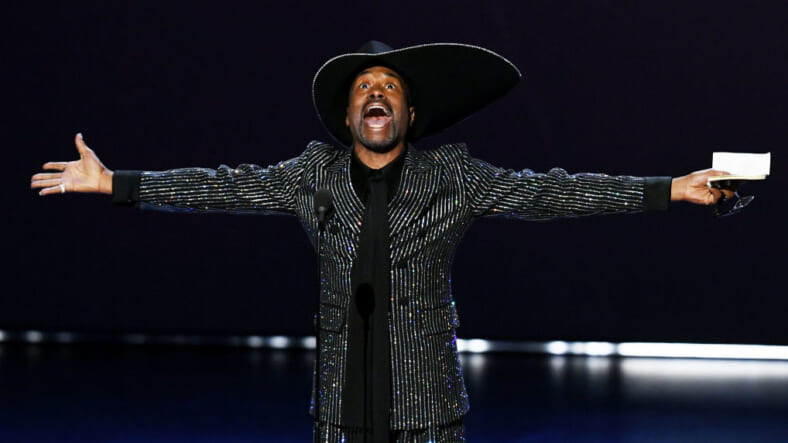 Billy Porter just made history as the first openly gay actor to win the Emmy for Outstanding Lead Actor in a Drama Series for his role as Pray Tell in FX’s groundbreaking series, POSE.

Kerry Washington presented the award, noting “And once again we watch history unfold,” before announcing Porter as the winner.

Billy Porter makes history with Emmy nod for ‘Pose’: ‘The sky is the limit now, honey!’

“Oh my God I gotta read. Oh my God. God Bless you all. In a nod to his beloved POSW character, he said, “The category is LOVE, y’all, LOVE!”

The actor went on to quote James Baldwin in his acceptance speech.

“I am so overwhelmed and so overjoyed to have lived long enough to see this day. James Baldwin said, ‘It took many years of vomiting up all of the filth that I had been taught about myself and halfway believed before I could walk around this earth like I had the right to be here.’ I have the right, you have the right, we ALL have the right.”

Porter, who plays outspoken ballroom emcee, Pray Tell, said that when he found out that he was nominated, he could finally exhale.

“I just haven’t been breathing for the past day,” he said in anticipation for the Tuesday announcements of nominees. “So today, I was able to breathe — that was my first reaction!”

Though Porter is no stranger to making headlines, he noted that he never thought that a show like Pose would ever be a reality, but now he believes anything is possible.

“There was no context for this,” he went on to say. “I said the same thing about marriage equality. When we were growing up, there was no context because you could never see it. I’ve always had huge dreams but I realized now that my dreams have been springboarded off of things I have already seen. They weren’t about dreaming the impossible. They weren’t about dreaming things that didn’t exist. Ryan Murphy, Steven Canals, Brad Falchuk, FX  — everybody involved in the show taught me how to dream the impossible. The sky is the limit now, honey!”