Black man imprisoned in China for crime he denies committing returns to U.S. 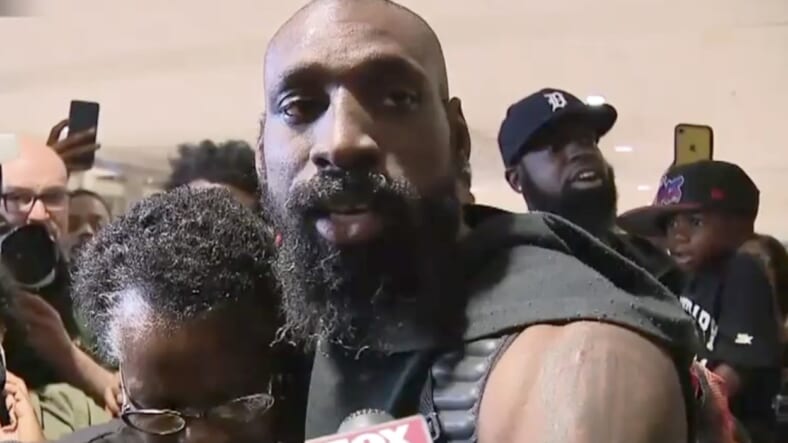 A former college football player who was imprisoned in China for three years after being convicted by that government for taking part in a barroom brawl is back in the U.S.

Family and friends greeted Wendell Brown with hugs and tears when he arrived home in Detroit Metro Airport on Wednesday, local station WJBK reports.  “Thank you all so much; I love you all so much,” Brown said hugging his loved ones. “We can smile, we can laugh, we don’t have to cry no more!”

The former Ball State University linebacker and standout at Detroit’s Martin Luther King High School had been living in China as a teacher and American football coach. But one night while attending a friend’s birthday party a fight broke out and Brown was the only one arrested in the incident, although he insisted that he only raised his hands in self-defense when attacked.

He was charged with with intentional assault because a man accused Brown of injuring his eye so bad it had to be removed. He demanded more than $100,000 in compensation, according to The Detroit News. Brown waited 20 months in custody while awaiting the June 2018 verdict. He maintained his innocence, but was sentenced to four years in prison.

A group that included family and friends consistently lobbied the heavily bureaucratic Chinese government for Brown’s release, and also sought help from the United States. The Chinese took a year off his sentence and he returned to America on Tuesday, arriving in Los Angeles.

Brown, 32, said he has a lot of catching up to do with his family and friends. He said he looked forward to eating and laughing again with his loved ones. his mother, Antoinette Brown-King already had a Thanksgiving dinner planned for him upon his return.

“I want to thank my friends, my lawyer, for the American embassy and all of the officials who got involved,” Brown said. “The state of Michigan. The city of Detroit. Ball State University. Everyone in the world who supported me in any way.”