DaBaby on dumbing down lyrics to win fans and going no. 1 on day of dad’s untimely death

The North Carolina rapper opened up about a number of personal issues when he sat down with Beats 1 Radio host Ebro Darden to discuss his latest album, Kirk 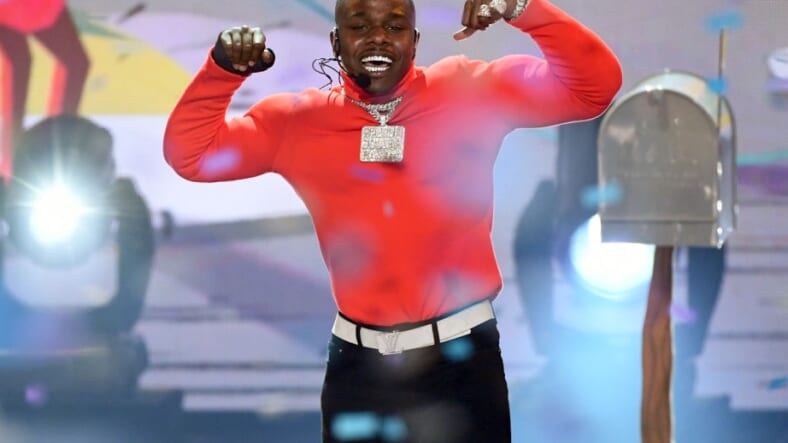 DaBaby opened up about his lyricism, the unexpected death of his father and more while promoting his new album, Kirk. (Photo by Kevin Winter/Getty Images)

During a recent promotional run for his newest album Kirk, rapper DaBaby stopped by Beats 1 Radio, where he sat down with host Ebro Darden to discuss his latest musical project.

During his interview, the 27-year-old artist, real name Jonathan Lyndale Kirk, revealed the inspiration behind the album name.

“[The] last name, you know it holds big weight. So we dedicating this one to my pops. It’s real,” the rapper stated.

The North Carolina raised rapper, who hit mainstream fame with his track “Suge,” opened up about finding out of his father’s death, the same day his song went number one on the charts. DaBaby said that while in the middle of receiving congratulatory calls for his chart-topping single, his brother called to reveal that his father had passed.

READ MORE: Da Baby gets heckled by fellow rapper Cam Coldheart, then gets some licks in

“I found out my pops passed [same day] my song went number one. Death don’t really like- I’m numb to it, from what I’ve been through. You can call it traumatized, whatever you want. But pops? That f**ked me up. I ain’t even going to lie. Especially with it being out of nowhere, and the relationship I got with him, he turned me up. He’s the reason I’m built like this, because nothing [was] ever good enough,” the rapper revealed.

He continued, “As far as I know, my pops healthy as hell. He go to the gym everyday, he only drink water, he gives my daughter vegetables. So he’s always been [healthy] as far as I know.”

While on the topic of his newfound success, DaBaby, who also revealed that his rap name was originally short for “Baby Jesus,” admitted to Ebro that he had to “scale back” a bit on lyricism in order to capture a larger audience.

“I ain’t even no where near my prime right now. I had to scale back a little bit, I felt like, in order for everyone to catch on. Like the type of music [I made before]… was better than [music] i put out today. Like, I really mean that. If you know me, you know,” DaBaby said.

He continued, “Everything is organic. I got the wordplay, I got the vocabulary to really, really rap.”

READ MORE: J. Cole does NOT want to be famous: This and 5 other facts we’ve just learned about the rapper

DaBaby, who is also featured on the intro of Dreamville’s “Revenge of the Nerds 3” featuring J.Cole, used Cole and fellow rapper Kendrick Lamar as examples of artists with strong lyrics that often “go over” the heads of listeners.

“When I listen to a Kendrick Lamar verse, J. Cole verse, I hear everything [they] saying. The first time I listen to it, I understand it, and I can digest it. I can really listen to it. A lot of people can listen to sh*t like that and it goes over their head. A lot of people just want to hear the beat, [but] I can do both of them,” DaBaby admitted.