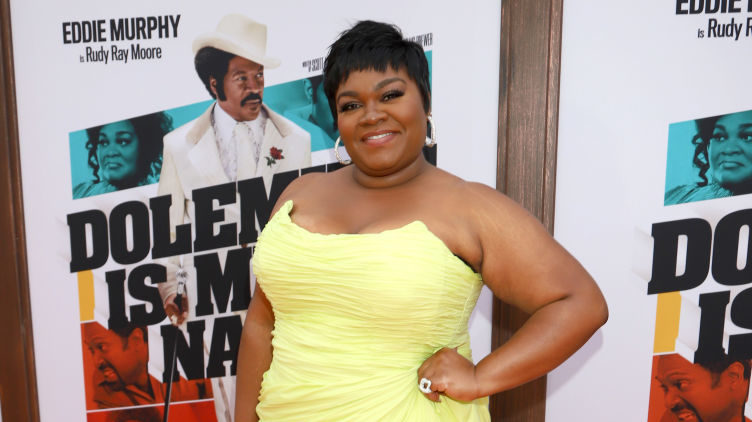 Dolemite Is My Name hits select theaters this week and while there are plenty of aspects to rave about, we have a feeling folks will be talking about Da’Vine Joy Randolph long after they leave the theater.

The multi-talented actress co-stars alongside Eddie Murphy as Lady Reed, and her performance is nothing short of brilliant.

Here are 5 things to know about this talented star on the rise:

Long before she was showing off her acting chops alongside industry heavyweights like Eddie Murphy, Wesley Snipes, and Keegan-Michael Key, this girl was getting her education at Temple University. After that, she earned her Masters degree at a little institution called Yale School of Drama.

Da’Vine Joy Randolph is a master of the stage as well, portraying Oda Mae Brown in the original Broadway production of Ghost in 2012. She also took on the role on the West End and her performance got her nominated for a Tony Award for Best Performance by an Actress in a Featured role.

PHOTOS: Eddie Murphy, Samuel L. Jackson, Wesley Snipes and more show out at premiere of ‘Dolemite Is My Name’

You’ve seen her on the small screen.

While Randolph may seem like a newcomer, you’ve probably seen her gracing your small screen before. She has had several TV stints including a recurring role on Empire and appearances on shows like People Of Earth and The Good Wife among others.

Da’Vine Joy Randolph is currently featured on SHOWTIME’s odd and addicting new series On Becoming a God in Central Florida.  She’s also set to star alongside Zoe Kravitz in the upcoming ABC/Hulu series High Fidelity. She has also been cast opposite Evan Rachel Wood in Kajillionaire.

She’s holds her own.

Dolemite Is My Name is full of iconic actors and comedians including Eddie Murphy, Wesley Snipes, Keegan-Michael Key, and Mike Epps, among others, but Randolph holds her own amongst the greats and comes through as the real heart of the film.

Stung by a string of showbiz failures, floundering comedian Rudy Ray Moore (Academy Award® nominee Eddie Murphy) has an epiphany that turns him into a word-of-mouth sensation: step onstage as someone else. Borrowing from the street mythology of 1970s Los Angeles, Moore assumes the persona of Dolemite, a pimp with a cane and an arsenal of obscene fables. However, his ambitions exceed selling bootleg records deemed too racy for mainstream radio stations to play. Moore convinces a social justice-minded dramatist (Keegan-Michael Key) to write his alter ego a film, incorporating kung fu, car chases, and Lady Reed (Da’Vine Joy Randolph), an ex-backup singer who becomes his unexpected comedic foil. Despite clashing with his pretentious director, D’Urville Martin (Wesley Snipes), and countless production hurdles at their studio in the dilapidated Dunbar Hotel, Moore’s Dolemite becomes a runaway box office smash and a defining movie of the Blaxploitation era.

Dolemite Is My Name hits select theaters on October 4 and debuts on Netflix on October 25.