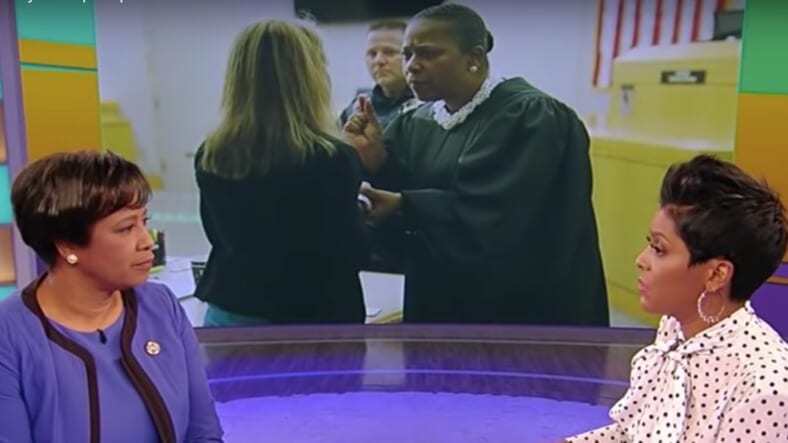 Judge Tammy Kemp who made headlines for hugging convicted murderer Amber Guyger and handing her a Bible in the high-profile case, appeared on the Tamron Hall Show and defended her actions, saying it wasn’t as unorthodox as people perceived it to be.

Kemp presided over the case involving Guyger who shot and killed an unarmed Black man, Botham Jean. Kemp said after she urged Guyger to give her life to the Lord, the former Dallas cop then told her she didn’t know where to start and didn’t even have a Bible, so Kemp said she offered hers.

“[Amber] said, ‘Do you think God will forgive me? … I don’t even have a Bible, I don’t own a Bible, I don’t know where to begin,'” the judge recalled. “In that moment I didn’t want to lose Amber Guyger and so I said, ‘Hold on, I’ll get you a Bible.'”

Kemp then went into her chambers and grabbed her book to give to Guyger.

“You can have [my Bible]. I have three or four more at home,” Kemp said to Guyger in the courtroom. “This is your job for the next month. Right here, John 3:16.”

That controversial move even prompted The Freedom From Religion Foundation (FFRF), a secular Wisconsin-based organization, to file a formal complaint against Kemp. The group is asking for a judge to launch a misconduct investigation.

Tamron Hall asked about her actions: “But does it get confusing when a judge behaves that way? In that, you are there for the law, not for religion,” Hall asked.

“No, I was not there for the law. My legal duties had been concluded,” Kemp said.

Kemp also hugged Guyger which caused outrage online by many. Others applauded the judge for showing compassion. She defended the hug saying it’s something she often does after a verdict is read. She said she also hugged members of Jean’s family.

Still, she said while she hasn’t read the barrage of “brutal” comments thrown her way, her family is deeply concerned.

“My family’s concerned [for my safety], but I am not.”

“My faith is strong. If God brings me to it, he’ll bring me through it,” an emotional Kemp said to audience applause. “This is one of the reasons I’m addressing the hug so that people will understand the sum total of what happened.”

Kemp also cleared up the widely circulated video of a bailiff in the courtroom touching Guyger’s hair, saying she actually was not primping and fixing Guyger’s hair. Instead she explained that Guyger was getting processed ahead of going to jail and the bailiff was charged with searching her hair to check for contraband.

“If you know anything about the jail, you gotta search every part of a person, including their hair, because we have people smuggle contraband and weapons in all manner of ways,” Kemp said.

“This is why we do this show. This moment went viral, this woman was mocked on social media, people said things about her — they referred to her [in ways] that were horrible,” Hall said. “They assaulted her on social media and she was doing her job.”

Griofam, are y’all sorry for dragging Kemp and the bailiff now that she has explained herself or nah?