While two other men are seen kicking victim Muhlaysia Booker in the assault, he alone has been charged 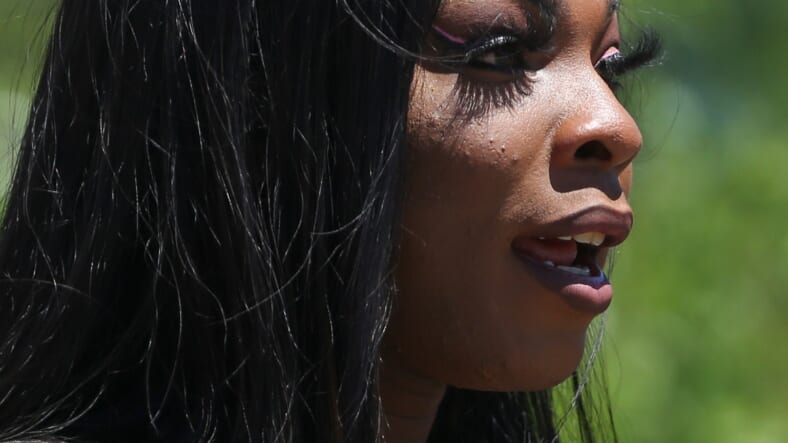 The trial of Edward Thomas, the man charged in brutally beating a transgender woman in a mob attack that went viral in Dallas, started on Monday.

Thomas was the only suspect charged with violently attacking Muhlaysia Booker on April 12, although several others were seen stomping the transgender woman in the head at Royal Crest Apartments in east Oak Cliff in Dallas.

Booker suffered a broken wrist and a concussion, and her case made national headlines- shedding light on the plight of transgender people and the hate and perils they faced daily. A month later, on May 18, Booker was shot and killed. Her body found face-down in a street near a Dallas golf course. Kendrell Lavar Lyles, was charged with her murder.

Thomas, 29, admitted that he was paid a paltry $200 to violently beat Booker, according to an arrest warrant affidavit, The Dallas News reported.

In a video that was shared on multiple social media sites, Thomas appears to put on gloves, before he walks over to Booker and pummels her. Two other men are seen stomping the woman, according to police documents. But there’s no word on why they were never arrested.

The troubling video that featured Booker’s brutal beating brought her grandmother to tears.

“It was just horrific. It was just terrible,” said Debra Booker, 62. “Who’s that vicious?”

Debra said watching Booker’s friends carry the 23-year-old “like a paper doll” made her cry.

Yet she said her granddaughter wasn’t scared, but was angry.

Booker become a beacon of life in the midst of her personal darkness following the assault. She spoke out at a rally just a week after the violent attack.

“This time, I can stand before you, where in other scenarios, we’re at a memorial,” Booker said.

She declared, the “time to seek justice is now.”

“It’s sad that Muhlaysia had to become famous after death,” her father, Peirre Booker, said.

Thomas is in jail without bail. A court date for Lyles has not been set yet.