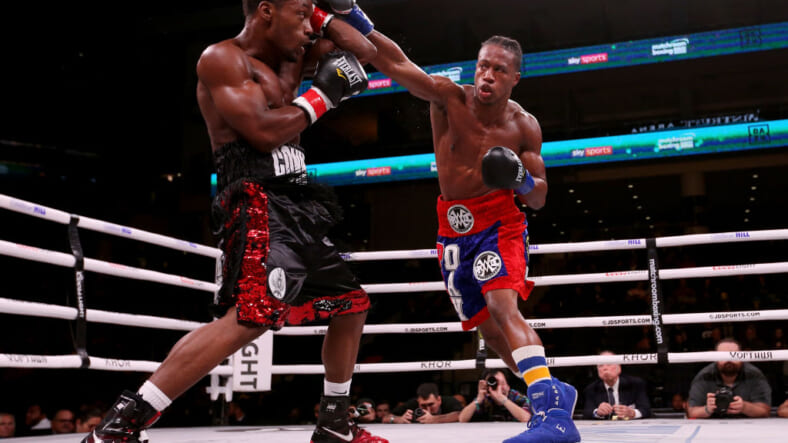 CHICAGO, ILLINOIS - OCTOBER 12: Patrick Day (R) lands a punch on Charles Conwell in the third round of their Super-Welterweight at Wintrust Arena on October 12, 2019 in Chicago, Illinois. (Photo by Dylan Buell/Getty Images)

Boxer Patrick Day never regained consciousness and died after he was knocked out and suffered a “traumatic” head injury on Saturday during a fight in Chicago.

“Patrick Day passed away today, October 16, 2019, succumbing to the traumatic brain injury he suffered in his fight this past Saturday, October 12, at the Wintrust Arena in Chicago, IL. He was surrounded by his family, close friends and members of his boxing team, including his mentor, friend and trainer Joe Higgins. On behalf of Patrick’s family, team, and those closest to him, we are grateful for the prayers, expressions of support and outpouring of love for Pat that have been so obvious since his injury.”

It’s a sad ending, after Day fought against defending champion Charles Conwell during a USBA super welterweight title bout in Chicago. He was struck with a right hand that stunned him, and then “floored the challenger with a left hook in the 10th round.”

ESPN reports that the 27-year-old Freeport, N.Y., native was hospitalized with a “traumatic brain injury,” according to DiBella Entertainment, his management team. He is also said to have suffered seizures on the way to the facility and had to undergo emergency surgery.

“Patrick’s condition is extremely grave,” Day’s trainer, Joe Higgins, said Sunday. “He is fighting for his life. That’s all we can really say right now.”

Day was an alternate on the 2012 Olympic team and has a record of 17-4-1 with six victories coming by knockout. Saturday marked only the second time he has ever lost by knockout.

As his opponent, Conwell expressed concern for Day in an interview right after he was taken out of the ring on a stretcher, and elaborated on his feelings in a heartfelt letter he penned to Day and posted on social media.

We send our condolences to his family.