Maxine Waters to Mark Zuckerberg: ‘Perhaps you believe you are above the law’ 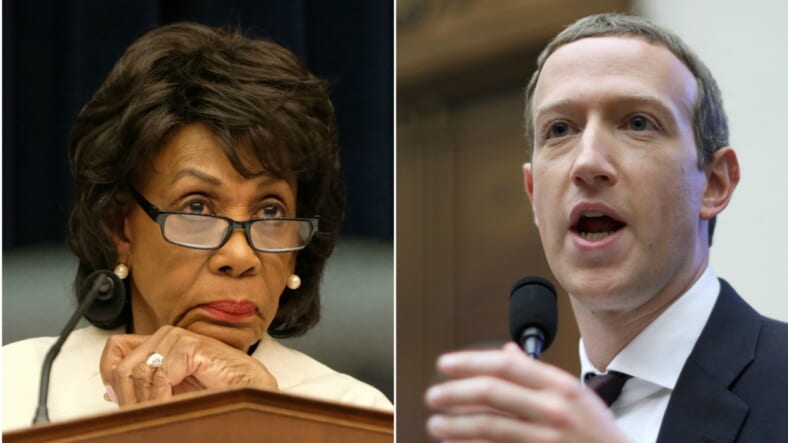 According to Fast Company, on Wednesday, Waters slammed Zuckerberg for his company’s practices after he showed up as the sole witness before the House Financial Services Committee hearing on Facebook’s proposed digital currency.

The Committee also wanted to learn more about the social media giant’s plans to combat election interference in the 2020 contest. But before anyone could really get into any of that, Waters kicked off the hearing by chastising the billionaire CEO for his company’s lack of diversity, the anti-trust investigations into Facebook, its digital currency Libra, and the company’s impact on society as a whole.

Waters posed concerns about last week’s announcement that Facebook would not fact-check political ads, contending that Zuckerberg had done so to make a profit off of political ads even in cases where that resulted in “massive voter suppression.”

“You announced a new ad policy that gives politicians a license to lie so you can earn more money off this division, I suppose,” she said. “Your claim to promote freedom of speech does not ring true Mr. Zuckerberg.”

Rep. Waters: "Are you telling me…you plan on doing no fact checking on political ads?"

Zuckerberg: "Our policy is that we do not fact check politician's speech….we believe that in a democracy it is important that people can see for themselves what politicians are saying." pic.twitter.com/dYDaM1d0cd

“Perhaps you believe that you are above the law,” she continued. “And it appears that you are aggressively increasing the size of your company, and a willingness to step on over anyone, including your competitors, women, people of color, your own users, and even our democracy to get what you want. All of these problems as an outline and — given the company’s size and reach — it should be clear, while we have serious concerns about your plans to establish a global digital currency that will challenge the U.S. dollar.”

“You have opened up a serious discussion on whether or not Facebook should be broken up,” she concluded ominously.

The clearly stunned CEO merely smirked and then whispered to his staff as a victorious Waters turned the microphone over to the GOP minority member.