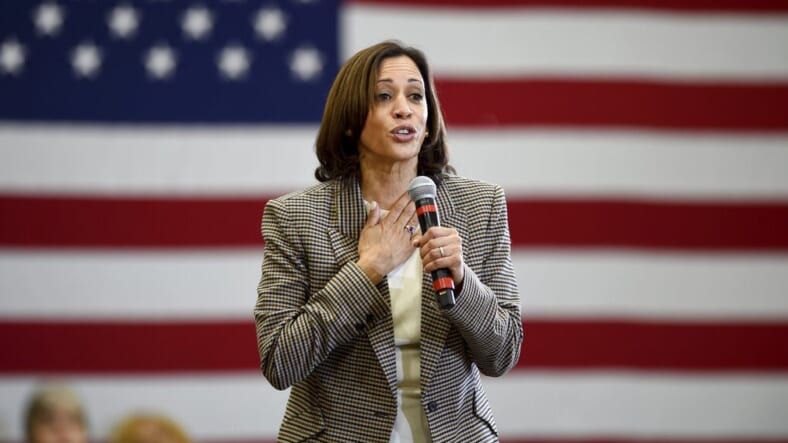 By KATHLEEN RONAYNE Associated Press
SACRAMENTO, Calif. (AP) — Democratic presidential candidate Kamala Harris is laying off several dozen staff members and transferring others in an effort to salvage her prospects in the Iowa caucuses.

The move, which comes roughly three months before the caucuses formally usher in the Democratic contest, make the California senator the most prominent candidate so far to announce a major campaign restructuring. Harris’ campaign turned to history to make the case that in order to win the leadoff caucuses, candidates sometimes have to overhaul their operations.

“Plenty of winning primary campaigns, like John Kerry’s in 2004 and John McCain’s in 2008, have had to make tough choices on their way to the nomination, and this is no different,” her campaign manager, Juan Rodriguez, wrote in a memo to staff that was shared by the campaign Wednesday.

Politico was the first to report the overhaul.

Harris had already pledged to go all-in on Iowa, joking she was moving there, and earlier Wednesday her campaign touted the 15 days she spent in the state this month as the “October Hustle.” It was more than any of her competitors spent there in October, but she’s still polling behind leading candidates such as Joe Biden and Elizabeth Warren.

The latest changes come a full month after Rodriguez visited Iowa to evaluate the campaign’s organization and on the eve of an important Iowa Democratic fundraiser. On Friday, thousands of party activists, donors and officials — along with more than 150 members of the news media — will be listening closely to Harris’ speech for signs of new energy.

Among the changes outlined in the memo: Rodriguez and campaign consultants will take a pay cut, though it doesn’t say by how much; several dozen people will be laid off at Baltimore headquarters; and staff from New Hampshire, Nevada, California and headquarters will be moved to Iowa. The memo also doesn’t say how many people will be transferred to Iowa.

Harris plans to spend significant time in Iowa again in November, including over Thanksgiving.

The campaign, which has not yet run any television advertising, hopes to spend at least $1 million on a media campaign in the weeks before the Feb. 3 caucus, the memo said.
Rodriguez tried to distinguish the memo from what he called “gimmicks” by New Jersey Sen. Cory Booker and former Obama Cabinet official Julian Castro, who have released urgent appeals for money in recent weeks, raising the prospect of leaving the race if they couldn’t raise enough quick cash.

But Harris has underperformed on the fundraising front. She hails from California, a state that is home to many of the party’s most prominent donors and which has long served as an ATM for politically ambitious Democrats.

That hasn’t translated into success for Harris. Although she did better than her rivals in the state, she has struggled to raise money in recent months, despite keeping up an aggressive fundraising schedule.

She has consistently posted middling quarterly fundraising hauls. And during the most recent quarter, which ended Sept. 30, she revealed that she spent roughly $3 million more than the $11.6 million she took in while delaying about $1 million in payments to campaign strategists.

While her aides initially tried to project California as locked up in her favor, many of her rivals have found deep pockets of support among top donors there. Last spring, Democratic megadonor Susie Tompkins Buell, who was initially a top Harris fundraiser, also started to raise money for South Bend, Indiana, Mayor Pete Buttigieg.
___
Associated Press writer Brian Slodysko in Washington contributed to this report.
___
Online:
Read the Harris campaign memo: https://www.documentcloud.org/documents/6534360-Kamala-Harris-campaign-memorandum.html