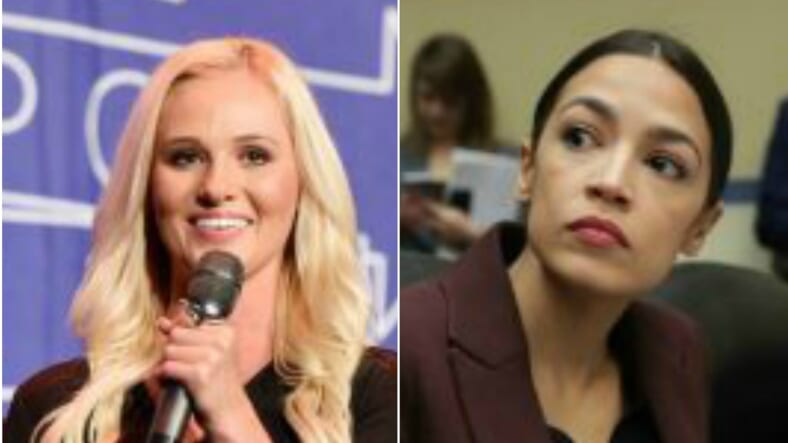 This year conservative commentator Tomi Lahren got into the Halloween spirit by dressing up as someone who she considers terrifying: Rep. Alexandria Ocasio-Cortez.

The Fox Nation host insists the costume makes sense because the freshman lawmaker is “the thing that scares her most.”

To look like the New York congresswoman, Lahren slapped on a brown wig and large dark-rimmed glasses. To complete the look she clutched a purple binder with the words ‘Green New Deal’ emblazoned on the front, along with a copy of The Communist Manifesto.

READ MORE: Tomi Lahren to Beyonce: Your husband was a drug dealer, worry about that

Lahren, 27, has built her career on trolling progressives, particularly Black and Brown celebrities like Colin Kaepernick, Beyonce and Jay Z. This time she took aim at AOC, of whom she has long been a critic as well.

Thursday, she posted a selfie on Instagram of herself in the outfit and used her caption to take shots at Ocasio-Cortez who she describes as the “Democratic Dimwit Darling.”

This Halloween I decided to dress up as the thing that scares me most, the Democratic Dimwit Darling herself. I’m not afraid of ghouls, ghosts, zombies or political incorrectness. I am far more terrified AOC was actually elected to the United States Congress. Talk about a haunted House… #TeamTomi #halloween #AOC #SocialismKills

READ MORE: Bernie Sanders: Alexandria Ocasio-Cortez would be part of his White House

The caption was accompanied by the hashtag #Socialism Kills and #TeamTomi.

Earlier this year Lahren received some backlash for claiming AOC — who is the youngest woman to ever be elected to Congress — is only successful on social media but not “in real life.”