WATCH: Jason Mitchell denies sexual misconduct and opens up about being fired from ‘The Chi’ 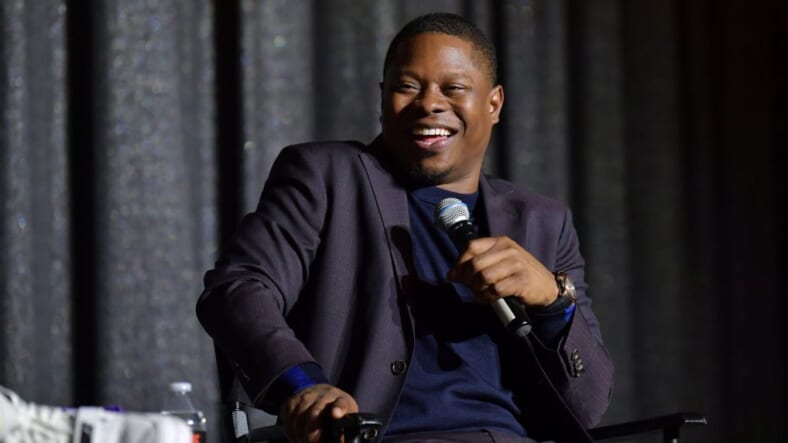 Jason Mitchell attends Showtime's "The Chi" For Your Consideration event at Silver Screen Theater at the Pacific Design Center on April 10, 2019 in West Hollywood, California. (Photo by Amy Sussman/Getty Images)

Jason Mitchell is speaking out about the sexual misconduct allegations that reportedly cost him his job on The Chi and got him fired from the Netflix film, Desperados.

The actor, who was also dropped from his management company amid the controversy, opened up about the situation on The Breakfast Club on Monday.

During the interview, Mitchell claimed he’s still not clear about why he was dismissed from Desperados, despite reports that there were several complaints about his behavior on set.

“To be honest I’m not 100 percent sure what the allegations themselves were, but I can tell you what happened. We were in pre-production and I went out with a co-worker of mine and she got drunk. Being the person that I am, I felt responsible to make sure she got home…we’re in Mexico City and we’re in a foreign land and we should stick together. This isn’t where I leave her. I made sure she got home and the next day it kind of all slapped me in my face,” he said.

“I’m not sure if her and her significant other had a situation because I did FaceTime her boyfriend to figure out how to get there and go about getting her home. I actually had a girlfriend at the time. I felt like I was doing the right thing. The next day, they said they needed to talk to me about this activity and I told them my side of the story but it felt as if there is something that I missed,” he continued.

“If I ever made anybody feel any kind of way, you have my deepest apologies because that was never my intention. I’ve definitely never put my hands on somebody. I think it was a series of events that led to things being weird between us.”

When it comes to his dismissal from The Chi, Jason Mitchell offered a pretty different story than the picture painted by the show’s creator, Lena Waithe and Season 2 showrunner, Ayanna Floyd Davis.

According to reports, Mitchell’s on-screen girlfriend, Tiffany Boone is one of several actresses who made complaints about the actor. Some sources say Waithe didn’t do enough to protect her cast, but she insists she yielded all the power she could to rectify the situation.

“I knew what I was dealing with on the show, but I wasn’t made aware of anything going on with Tiffany until after the season had wrapped and when Tiffany and I had a conversation – and out of respect for her privacy, ’cause the conversation we had was private – we did discuss stuff that was just inappropriate. And I remember looking at her – ’cause we were Facetiming – and I was like, ‘Yo! This is not cool! I feel awful that you had this experience on my set that’s not pleasant…By the time the season had wrapped, I had a little bit more power. I had a little bit more clout, and I was like, ‘Here’s what I’m going to do to change that. I’mma hire a woman of color as the showrunner….’ – so I can already say that the idea of me hearing something and not doing anything just isn’t true,” Waithe told The Breakfast Club in May.

Lena Waithe breaks silence on Jason Mitchell scandal: ‘I don’t have the power to fire anybody’

“Tiffany Boone left the show because she got a better job. She put in two seasons with us and she went on to get a better job. Anybody who knows Tiffany Boone knows that she is the epitome of a Black woman…if you try her, she will get you together, right then and there. I encourage people to be more like that. Had me and Tiffany ever had a situation in which she felt sexually harassed, she would have told me about myself in that moment,” he said.

“Me and Tiffany have never been the best of friends, we just told each other we don’t have to laugh, kick it, skate none of that. We have our different views on things and that’s pretty much how it is. We are both people who are very opinionated. Our spirits don’t jam.” Still, he said, “Tiffany has never went to HR, Tiffany has never made a statement.”

Mitchell seems to believe Ayanna Floyd Davis was behind his ousting and suggests there’s no bad blood between him and Lena Waithe.

“Lena has done nothing but create opportunities for us all. It was just painful to watch to see Lena have to save her brand from something that went on with me. Shout out to Lena Waithe, she’s still always going to be a good friend of mine,” he said. “To be honest, I really hate to say this. I’m all for the #MeToo movement, but I think, in this situation, Ayanna tried to use it as a really ugly weapon.”

Check out the interview: