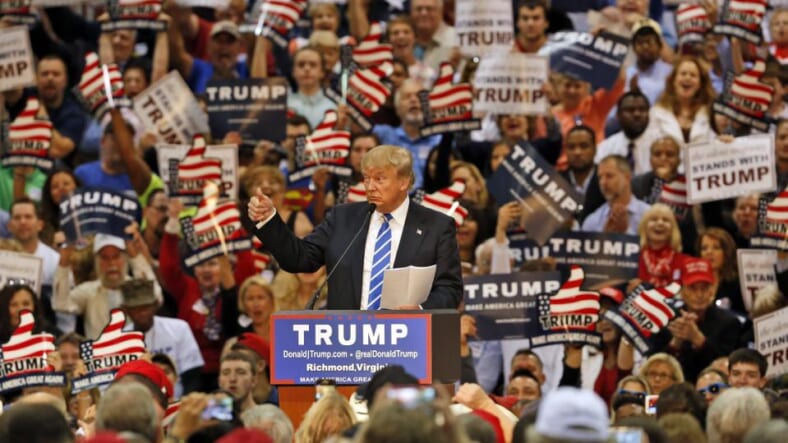 Donald Trump gestures during a speech to supporters at a rally in Richmond, Va., Wednesday, Oct. 14, 2015. (AP Photo/Steve Helber)

President Donald Trump chose Atlanta as the site to launch a new initiative this week.  His aim is to build a contingent of Black voters who will support his re-election.

The president will unveil his Black Voices for Trump Coalition during a 3 p.m. rally on Friday at the Georgia World Congress Center, The Atlanta Journal-Constitution reports. He is expected to take credit for recent statistics that show that unemployment is down among Black people. He is also looking to highlight an opportunity zone program that incentivizes investors to choose depressed areas for their developments.

READ MORE: Donald Trump delivers keynote at an HBCU to let us all know how much he cares about criminal justice reform

Trump chose Atlanta to announce his new initiative for the optics, and the realization that Republicans need to win Black voters in Georgia. Atlanta’s Black population is one of the most concentrated in the nation. However, if last year’s election is any indication, Black voters in Georgia overwhelmingly vote Democrat. Stacey Abrams, the Democratic gubernatorial candidate, received 94 percent of the Black vote over Republican Brian Kemp, according to exit polls.

Nationally wasn’t better for Trump in 2016.

And his numbers could be dipping downwards. A recent poll by The Associated Press-NORC Center for Public Affairs Research revealed that only 4 percent of African-Americans think the president’s actions and policies have been good for Black people, reported The Journal-Constitution.

In fact, many say he has actually hurt Black people, and point to instances where Trump used offensive language toward Black people in Haiti and Africa, while failing to denounce white homegrown supremacists and terrorists in the United States.

Democrats are expected to remind Black voters of Trump’s past disrespect to Atlanta and one of the city’s treasured leaders. When Rep. John Lewis (D-Atlanta) announced he was boycotting Trump’s inauguration, Trump tweeted that Lewis’ congressional district, which comprises Atlanta, is in “horrible shape and falling apart.”

Trump will likely point to prominent Black support of several Georgia leaders, including Alveda King, a niece of the Rev. Martin Luther King Jr., and Bruce Levell, a jeweler in Dunwoody who backed Trump in 2016.

Friday’s rally marks the president’s seventh trip to Georgia since his election.