The President will speak at the 2019 Second Step Presidential Justice Forum at Benedict College. 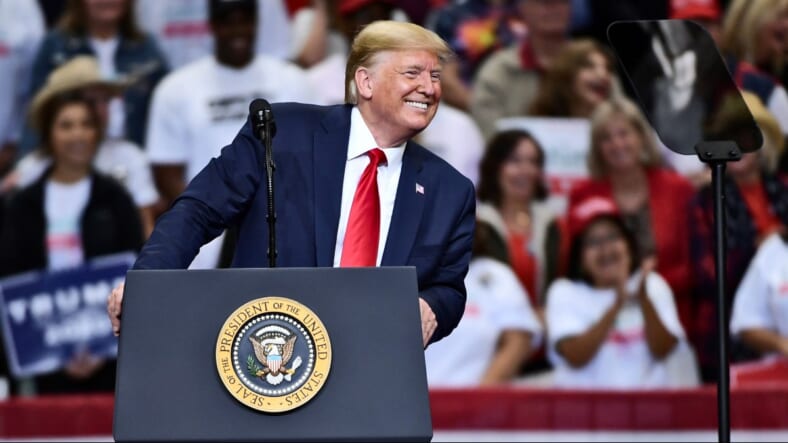 Today, Donald Trump is headed to the campus of Benedict College in Columbia, South Carolina, a 150-year old, historically Black college. It will be his first appearance on the hallowed grounds where thousands of African American students toiled to receive their higher levels of education.

The President is not there to talk to students about the country’s “impressive” rising employment rate or shout out the benefits of attending HBCUs. Instead, he is at Benedict to deliver the keynote speech at the 2019 Second Step Presidential Justice Forum.

Hosted by the 20/20 Bipartisan Justice Center, the event is an effort supported by both political parties to focus on what’s next in the ongoing battle to change criminal justice in the United States.

On Friday, the forum will concentrate on “The Conservative Case for Criminal Justice Reform,” providing Trump with the opportunity to talk about how he made the FIRST STEP Act a reality by signing it into law on December 2018.

Passed with bipartisan legislation, the Formerly Incarcerated Reenter Society Transformed Safely Transitioning Every Person Act has the potential to impact nearly 200,000 people incarcerated in federal prisons but has already helped thousands of nonviolent offenders. Some people have seen shortened sentences for good behavior or even early releases along with access to job training, skill-building, education, and vocational training classes and counseling to help with the reintegration into society. It is also slowly eliminating recidivism, an impediment that continues to plague this population.

Trump will land in South Carolina this afternoon, well-known as the earliest primary state with a large share of Black voters. He’ll likely pontificate on how he has taken a more humanized approach to criminal justice reform, especially with direct council from his son-in-law and special advisor, Jared Kushner (whose father served time in federal prison) leading the charge. It will be interesting to see if Trump even acknowledges the more than 175 organizations and leaders who worked to get this Act on his desk in the first place or the fact that there is still much more work to be done.

#Cut50 is one of those organizations at the very heart of getting the First Step Act in front of Trump. The group steadfastly works with formerly and currently incarcerated people, community and national leaders, crime survivors, and even law enforcement to keep communities safe and families together.

Louis L. Reed is the national organizer with #Cut50 who sees the bigger picture around criminal justice reform that goes way beyond Donald Trump. In fact, while Trump is scheduled to be at the forefront of the conversation on Friday, several of the Democratic candidates for president are scheduled to speak at Benedict College on Saturday and Sunday.

Despite the President’s latest racist rhetoric and insensitivity (i.e. his remarks comparing the Democratic impeachment proceedings to a modern-day “lynching” is ubiquitous of both,) Reed reminds us that just two years ago, a bipartisan conversation around this issue wasn’t even a thing.

“I’ve got 99 problems with Trump, but the First Step Act ‘aint one of them,” says Reed.

“As someone with first-hand knowledge with incarceration, despite the controversy, despite the bipartisanship, despite political disagreements, we have truly entered a new moment in this country. The fact that somebody like President Trump can compare criminal justice reform records with Democratic Presidential candidates is unbelievable and a positive sign for those like me who have directly experienced the American justice system and seen its failures.”

Reed has worked with many of them but says today is an opportunity to talk about what it’s going to take to get the next phase of reform to take shape.

“For us at #Cut50, the next step is converting this moment into a movement,” he explains.

“We have the opportunity to pass more laws, enact more reforms and end the mass incarceration era that has perpetuated the last 40 years. We can also make sure that those who come out of prison, like the thousands of people who were reunited with their families under the First Step Act, are given a way to succeed. This means investing in Second Chance programs that support job training, education, transportation, housing, employment, and substance abuse treatments.”

READ MORE: Locked up for nearly 14 years, this activist is fighting for criminal reform justice through the FIRST STEP Act

The conversation will surely focus on the fact that supporters from across political lines came together for the greater good. It’s a message Benedict College President and CEO, Roslyn Clark Artis, PhD., is excited to share and believes can be extremely beneficial to her student population.

“We want to emphasize criminal justice reform is a bipartisan issue, and this weekend highlights this point,” Artis said in an interview with WIS News.

“It’s difficult to separate feelings about individuals whether they are Republican or Democrat. You can understand these are guttural, emotional issues for most people. You can understand people’s emotions. People’s strong feelings for or against a particular candidate and that noise threatens our ability to think clearly and engage with one another and to find common solutions to common problems in our country.”

Classes at Benedict College will be canceled today and no students or faculty are required to attend the Forum. The school wants to be clear that while they are not hosting the justice forum, they are happy to sponsor the event. And, according to WISTV.com, if all goes as scheduled, Trump will be there at 2:30 p.m. Tickets for his keynote speech have reportedly sold out and according to Benedict student body President Jordan Rice Woodruff, some students will even have the opportunity to ask Trump questions, reports the Greenville News.

Reed admits that this weekend will be a swirl of probabilities around which policy or reform will work best, but his specialty is dealing with the men and women and their families who are going to be directly affected by whatever is decided, no matter which political box they check.

“People in the prison house don’t care about who is in the White House, so long as they get back to their mama’s house. Period.”

Wendy L. Wilson is the managing editor of theGrio. Find her rant, raves, retorts, and reviews on Twitter @WendyLWilson_