Willard Miller arrested for grabbing a white teenaged girl by the neck, and violently throwing her to the ground 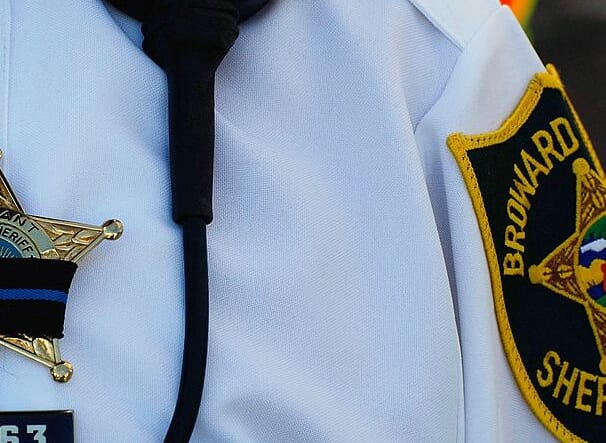 A Broward County Sheriff’s deputy is facing a felony child abuse charge for choking and slamming a teenaged girl to the ground inside of a school.

Surveillance video recorded Willard Miller, a school resource deputy, grabbing the 15-year-old girl by the throat and throwing her to the ground. As reported by theGrio.com, the incident happened at Cross Creek School, a school in Pompano Beach, Florida for children with behavioral issues. Miller was arrested on Tuesday and charged with a felony count of child abuse without great bodily harm, according to Atlanta Black Star.

“The way the deputy responds, for whatever occurred, whatever type of verbal dialogue was going on, it makes no sense and it wasn’t necessary,” Sheriff Gregory Tony said, according to Atlanta Black Star.

In the incident, Miller, 38, who is Black, and the girl, who is white, are seen exchanging words a few minutes before Miller comes after the girl and lifts her up by the neck. He then pins her on the ground with her hands behind her back. He has been a Broward Sheriff’s deputy since 2016, but is now suspended without pay pending the outcome of the investigation.

The handling of the incident is not sitting well with some people, who point out that in other instances, white police officers who manhandle Black students receive little to no punishment.

For example, a school resource officer in New Mexico was filmed manhandling an 11-year-old Black girl, but the county district attorney’s office declined to charge that officer, Zachary Christensen, in that instance.

Also, in Richland County, South Carolina, an officer grabbed a Black teenager out of her chair and dragged her from the classroom, yet was never charged criminally, Atlanta Black Star reported. In this case, there was video evidence yet prosecutors said there wasn’t  “sufficient probable cause” to charge the officer.

“It’s so funny how people have so much sympathy for this  little white girl, but let it had been a little black girl they would be trying to find any and everything to blame her for what happened,” an online user said of the Cross Creek incident, according to Black Star.

“So quick to fire a Black officer (Willard Miller) for abusing a white child but not so quick to do that with a white officer to a Black child,” another user wrote in.