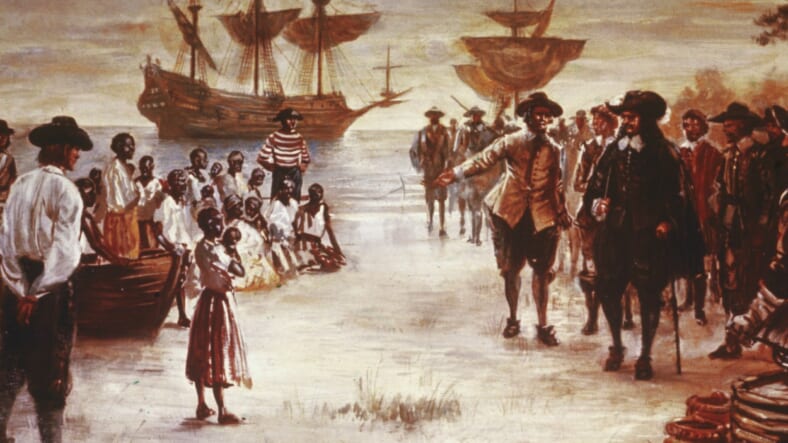 Engraving shows the arrival of a Dutch slave ship with a group of African slaves for sale, Jamestown, Virginia, 1619. (Hulton Archive/Getty Images)

New Jersey educators will soon be taking a field trip to sites associated with the transatlantic slave trade in order to better understand the nuances of Black history that are being covered in their lesson plans, according to The Philadelphia Inquirer.

This new initiative — which was the brainchild of Jacqui Greadington, a retired East Orange, N.J., music teacher turned activist — is part of a program under Amistad Law, a mandate signed in 2002 by then-Governor Jim McGreevey requiring teachers to teach Black history.

“There are people who have no clue about the value of the African American story,” said Greadington, adding that she got the idea after a visit to Ghana, “changed my life forever.”

Unfortunately, almost twenty years after the fact the mandate was not being widely implemented until now.

Friday, Gov. Phil Murphy announced the program at a news conference during the annual New Jersey Education Association in Atlantic City which included a keynote address by scholar and activist Cornel West.

“We all know that the work of racial justice is hard, but it’s far too important to let that stop us,” New Jersey Education Association president Marie Blistan told hundreds of attendees.

NJEA executive director, Ed Richardson, says next summer about 20 educators will be selected for the Amistad journey program to visit U.S. slavery sites, such as Jamestown, Va., Charleston, S.C., and New Orleans for this first year. Later the initiative will attempt to include a trip to Ghana where Africans walked through the “door of no return” at Cape Coast onto slave ships.

“All of our stories need to be told,” said Stephanie James Harris, the Amistad Commission’s executive director. “All of our narratives are important to American history.”

The teachers’ association will pick up the cost for the program, which is estimated to be about $75,000 a year.