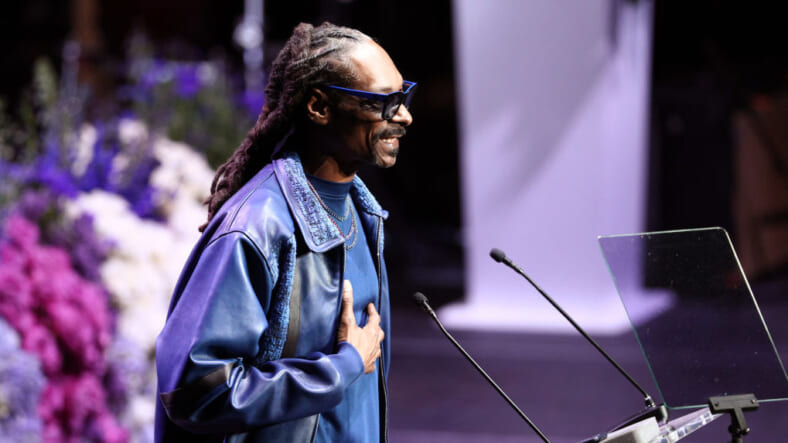 Move over John Legend, because Snoop Dogg has apparently voted himself 2019’s “Sexiest Man Alive” and even has a cover to prove it.

According to CNN, on Friday the “Gin and Juice” rapper joined in on the fun by posting a Photoshopped magazine cover that showed his face superimposed over Legend’s body.

“Sexiest Man Alive!” the cover posted, along with the title of a mock article titled, Snoop Dogg, How A Crip Took Your Chick. The rapper’s post was humbly captioned, “Thank. You.” and has already been liked almost a half million times in just the last three days.

Something tells us Legend is taking the teasing in stride given his sharp-witted wife, model Chrissy Teigen, was amongst the first to poke fun at his new title, tweeting that she had “fulfilled [her] dream of having boned People’s sexiest man alive!! an honor!!!!!” She later updated her followers by sharing that, “the sexiest man alive just made me a ham sandwich.”

The social media savvy mother of two also let it be known that she not only wasn’t scared of, but also welcomed, any heat from those who may think her beloved wasn’t deserving of his new honor.

“I cannot WAIT for people to get mad about John being the sexiest man alive. it’s my new Starbucks holiday cup,” she explained.

“1995 John would be very perplexed to be following 2018 @IdrisElba as #SexiestManAlive. Hell, 2019 John is about as equally perplexed but thank you @People for finding me sexy. I’ll take it,” the singer graciously wrote.

But then Teigen threw down the gauntlet by responding, “yeah but let’s see an @idriselba pic from 1995 (prob still very hot).”

Unfortunately for both of them, Elba took them up on the challenge and posted a sexy photo of himself from “1995ish.”