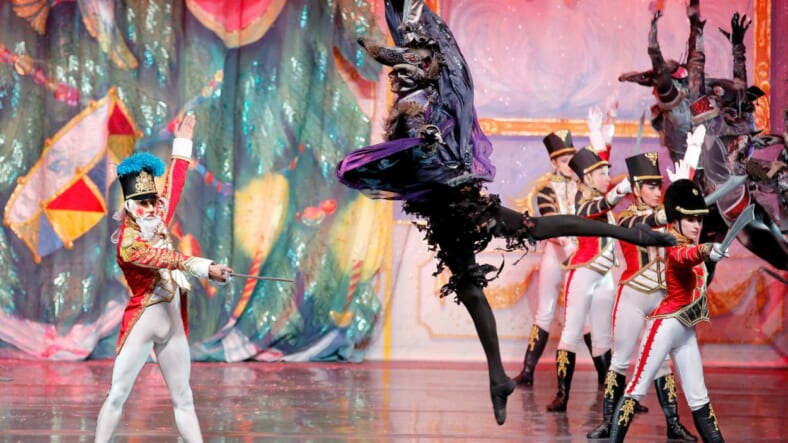 Members of the Moscow Ballet perform the "The Party Scene" on stage during the Moscow Ballet's Great Russian Nutcracker at the Hammerstein Ballroom on November 30, 2013 in New York City. (Photo by Jemal Countess/Getty Images)

At the tender age of 11, Charlotte Nebres is already making history after nabbing the lead role of “Marie,” the young heroine of George Balanchine’s The Nutcracker.

According to The New York Times, Nebres is the first Black ballerina to be cast in the lead role of the iconic holiday-themed production which opened Friday at New York City Ballet. In other productions of the ballet, the character is named “Clara.”

Balanchine’s The Nutcracker is a huge annual undertaking which features the company’s entire roster of more than 150 dancers and musicians, as well as more than 125 children, in two alternating casts from the School of American Ballet.

When asked about why ballet is important to her, Nebres replied, ⁠”To me, it just feels like when I dance I feel free and I feel empowered. I feel like I can do anything when I dance. It makes me happy, and I’m going to do what makes me happy. You don’t need to think about anything else.”⁠⠀

The child prodigy whose mother, Danielle, is Trinidadian, and whose father’s family is from the Philippines says it’s another history making ballerina who inspired her to follow her own dreams of entering an arena that has historically been whitewashed.

“I saw her perform and she was just so inspiring and so beautiful,” she said when speaking about her idol, Misty Copeland, who became the first female African American principal at American Ballet Theater when Nebres was only six years old. “When I saw someone who looked like me onstage, I thought, that’s amazing. She was representing me and all the people like me.”

When the 11 year old found out she was the first person of color to portray Marie, her response was, “Wow. That seems a little late,” recalls her mother.

But while her child may think society took too long to make this move, the significance of this casting isn’t lost on Danielle Nebres, who danced herself growing up.

“It really gave me chills thinking about it,” she concluded.

IN THE NEWS // The four School of American Ballet @sab_nyc children who alternate the roles of Marie and the Nutcracker Prince were recently profiled in The New York Times by Gia Kourlas. She sat down with them to discuss the rehearsal process, their lives off-stage, and their roles in the ballet.⁠⠀ ⁠⠀ When asked about why ballet is important to her now, in this moment, 11 year-old Charlotte Nebres, pictured here in rehearsal for her role as Marie, said:⁠⠀ ⁠⠀ "To me, it just feels like when I dance I feel free and I feel empowered. I feel like I can do anything when I dance. It makes me happy, and I’m going to do what makes me happy. You don’t need to think about anything else."⁠⠀ ⁠⠀ Photo: Heather Sten @heathersten for The New York Times @nytimes⁠⠀ ⁠⠀ See these very young dancers, who are the heart of George Balanchine's The Nutcracker®, now on stage through JAN 5. Tap the link in bio for tickets and more information.⁠⠀ ⁠⠀ #nutcracker #nycbnutcracker #thenutcracker #nutcrackerballet #holidayseason #georgebalanchinesthenutcracker #ballet #dance #balletdancer #dancelife #balletlife #instaballet #dancers #choreography #balanchine #nycb #nycballet #newyorkcityballet #newyorkcity #linkinbio #schoolofamericanballet