Presidential hopeful raises big bucks to end the year strong, hoping to qualify for next debate 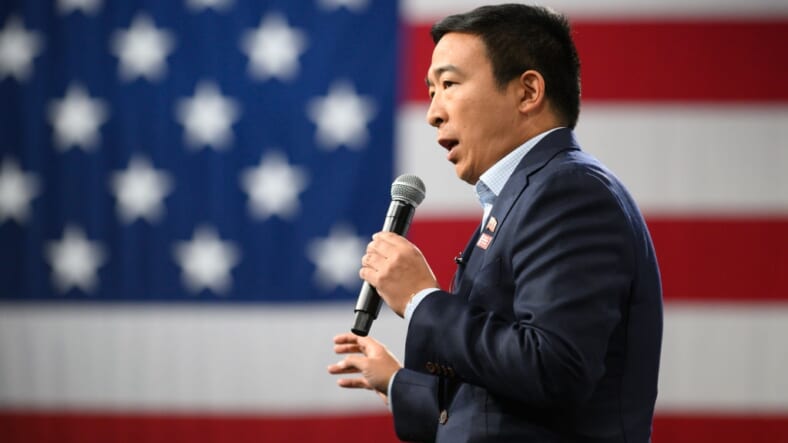 Malls and online retailers aren’t the only ones who saw an increase in activity during the holiday kick-off season. Presidential hopeful Andrew Yang set his own personal campaign record after raising $750,000 on Nov. 30.

Yang’s campaign took in more than 18,000 donations to raise more money than any other day during his campaign, according to POLITICO. And he did it without hosting a major fundraising party or pleading with potential donors like other campaigns have done, that he would need to drop out if he didn’t reach his targeted goal.

“I think what was so cool about this was all it took was ‘This is the end of the month’ and the campaign (stressing): ‘Hey, we’re small dollars here,” Nick Ryan, Yang’s campaign manager, told POLITICO. “Just putting that through a lot of organic channels, not having to drum up any sort of event around it, and we have a base that goes above and beyond.”

The $750,000 intake was part of a bigger goal set by Yang’s campaign to reach $2 million in donations in one week, which Yang tweeted that his campaign achieved early Sunday.

Thank you #YangGang – we did it! $2 million in a week!! You all are amazing. Fired up to take this campaign to new heights in December and 2020! ???? pic.twitter.com/jl6gylDB5h

Yang’s campaign raised roughly $10 million in the third quarter this year and continues to ramp up staffing, according to POLITICO.

Ryan told the news site that fundraising will enable the campaign to continue in the race as the primary season kicks off.

“We’re starting to show some movement in national polling, and I suspect a lot of the early states are going to reflect that investment as well,” Ryan told POLITICO. “We’re going to continue to staff up, continue to (build) an operation that’s going to compete in Iowa and New Hampshire.”

High up on Yang’s immediate goals is to qualify for the December primary debate. Hosted by POLITICO and PBS NewsHour, candidates must qualify by Dec.12, which means they must reach 4 percent in four polls approved by the Democratic National Committee and have donations culled from 200,000 contributors.